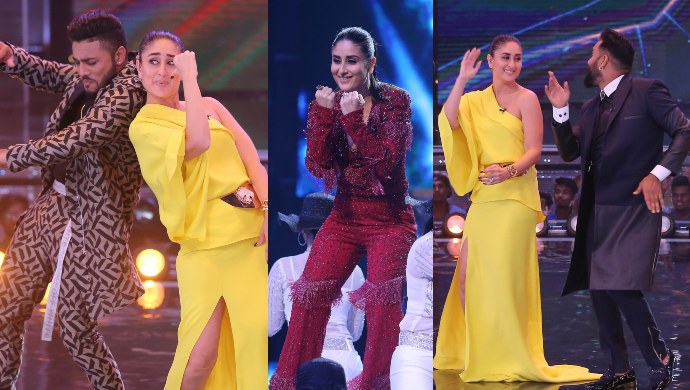 Trust Kareena Kapoor Khan to up the style quotient anywhere! Those who follow the Takht actress will know that KKK can turn even a gym into a fashion ramp. Her holiday pictures are goals and so are her chic airport outings. So, we were not one bit surprised when the Veere Di Wedding  (watch the movie here) actress doled out three hot looks back-to-back on Dance India Dance – Battle Of The Champions. And no, we’re not taking into consideration that glam outing in the DID latest promo video. Bebo, who is the newest tinsel town beauty to venture into the television space is ensuring that every look of hers impresses not just her fans and the fashion police, but also sets a new benchmark for TV judges’ styling. The actress has chosen three different hues and managed to kill each look. Let’s give you a lowdown on Kareena Kapoor’s fashion outing on DID so far…

#Maroon is the new red: Kareena’s first look on DID stage was a Falguni Shane Peacock bling onesie. The actress stood tall in a silver Jupiter block heels by Eridani. The Good News actress looked stunning as she grooved, her hair neatly tied up to the back. The look was cool, fun and sexy equal parts.

#Ms Sunshine: Not an easy colour to pull-off, Kareena did not just carry this Stephane Rolland gown; she literally was the bright spot in the gloomy monsoons. The Angrezi Medium actress experimented with her hair. Bebo opted for a pony with a twist and accessorised the yellow attire with golden belt and bracelet. If her outfit was a hit, her Giuseppe Zanotti heels were stunners!

#Thigh-high slit: Angelina Jolie may have started this trend in 2012 on the Oscars redcarpet, Kareena Kapoor Khan is owning it in 2019. While her yellow Stephano Rolland gave a sneak peek at Kareena’s sexy legs. Her latest look, a forest green long-sleeved gown by Tadashi Shoji. Interestingly, Kareena’s this look was borrowed from Hollywood actress Chloe Bennet, who had sported the same gown at the premiere of Crazy Rich Asians premiere in August last year. Kareena’s team gave her look a slight twist. The actress sported nude lips, Aquazzura heels and opted for a high bun.

Which of these three Kareena Kapoor’s looks did you like?