4 Scenes In Phobia Where Radhika Apte Outdid Herself

The actress plays Mehak, a woman suffering from a mental condition that scares her to step outside her house. 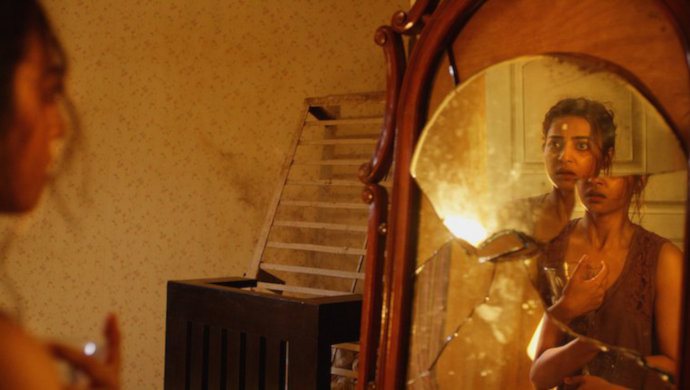 There’s no denying that one can expect nothing short of a stellar performance from Radhika Apte. The actress shot to instant fame with her act in Ahalya. She impressed furthermore with her memorable role in Sriram Raghavan’s Badlapur opposite Varun Dhawan. Since then, she has proven her impeccable talent in ventures such as Lust Stories, Sacred Games and Pawan Kripalani’s 2016 psychological thriller, Phobia.

The actress carries the entire film on her shoulders, keeping us hooked with her execution of a woman suffering from severe agoraphobia (fear of stepping out of the house). Though Radhika is brilliant in each frame, here are scenes from the film where the actress outdid herself.

1. Mehak’s fight with her sister

Mehak’s (Radhika) trauma post a horrific incident cripples her; she shivers at the thought of stepping out of the house and meeting strangers.

She is put up at her sister Anusha’s (Nivedita Bhattacharya) place and refuses to open the door for strangers, as she sees them as a threat. There comes a day when Anusha’s son is stranded outside the house, as Mehak is too scared to let him in.

This incident causes a huge fight between the two sisters. In this scene, one can experience the tension in the room, thanks to the brilliant performances by Radhika and Nivedita.

The actresses come across as natural and relatable. Radhika is in complete control of her character, flaring up and cooling down at the correct moments. Nivedita plays the part of the hassled elder sister with ease. What’s brilliant here is the flow of dialogue delivery, which makes the bickering seem natural.

Satyadeep Mishra as Shaan complements Mehak’s character effortlessly, playing the role of her caretaker and confidante. Hell breaks loose between the two when Mehak finds a packet of condom in Shaan’s bag. She accuses Shaan of trying to take advantage of her vulnerable situation.

This is the first time we get a hint of Mehak’s extreme paranoia. Shaan confesses that the packet is not for her but another girl he is seeing. An insecure Mehak asks Shaan to get out of the house.

Radhika and Shaan carry off this scene with tremendous aplomb. You believe that they might just be having this fight for real. The actors play off each other’s cues with ease and their chemistry is appealing.

Supporting characters add depth to a film and Yashaswini Dayama playing Nikki in Phobia is a perfect example. She is the friendly neighbour, intrigued by Mehak and her twisted world. Yashaswini adds freshness to this character with her easy-breezy act.

Nikki decides to help Mehak, when the latter complains that there’s a cat in her room and she is terrified. Radhika’s act of the damsel in distress is thrilling as well as hilarious, where you can’t help but be reminded of your phobias of snakes, lizards or spiders.

There’s a moment where both Nikki and Mehak scream out of some confusion and this is probably the only time when you would be in splits in this intense film.

Mehak is of the belief that her neighbour Mannu (played by Ankur Vikal) has murdered the former tenant of the house she is residing in. She seeks Nikki’s help to prove her theory. Nikki decides to sneak into Mannu’s house to find the murder weapon but gets locked inside.

Mehak decides to rescue her by stalling Mannu and asking him to fix the hole in her room’s wall. This is the scene where we are reassured that Radhika is the only actress who could have played Mehak.

She is seen having a breakdown and Radhika displays an array of emotions from panic, to disbelief, to vulnerability, all in a matter of minutes. It’s amazing how she switches from one emotion to the other with such ease.

Remember Radhika as a simple village girl playing the role of Akshay Kumar’s on-screen wife in PadMan? Which of her roles have you liked the most? Tell us in the comments section below!