Kumkum Bhagya’s Aaliya continues to be a bad person even in the new season, post leap. This time, instead of Tanu, she has Rhea as her accomplice! 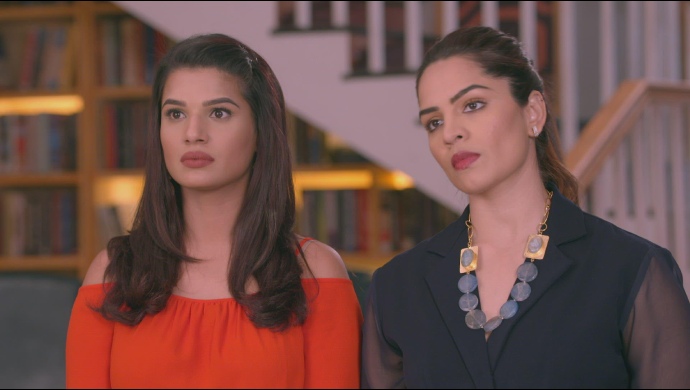 Aaliya Mehra continues to be a formidable foe to Pragya’s family. While the complications in Pragya’s life have dramatically reduced thanks to the MIA status of Tanu from Abhi and Aaliya’s house, Prachi can’t say the same! Prachi and Rhea are twins separated at birth but the two don’t know about it. In fact, Pragya and Abhi have already met their other twin daughter, however, they aren’t aware of it yet. Sadly for Prachi and Rhea, they already don’t like each other.

Although Prachi respects Pragya and doesn’t care much about Rhea’s animosity, Rhea has far too much angst and prejudice against Prachi to consider her as her mortal enemy. What’s worse is how Aaliya keeps adding fuel to the hatred. Despite the time that has passed, Aaliya’s ideology about middle-class girls being gold diggers has not changed one bit. This time, instead of attacking Pragya, she is trying to hurt Prachi by assassinating her character and making her look like a bad person.

The only reason why Rhea’s moral compass isn’t as pure and good as Abhi or Pragya is because of the influence Aaliya has on her. We have compiled some instances that prove how Aaliya has been nothing but bad energy that Rhea needs to chuck out of her life.

Even though Rhea feels bad for what is happening with Ranbir’s name being dragged to the mud or them trying to hurt Prachi, Aaliya continues to imbibe her mind with the idea that she is always right and is not apologetic. Much recently, when Rhea decided to come clean about her involvement in defaming Ranbir’s name by using Maya, Aaliya stopped her and said that she is never wrong and hence, shouldn’t have to say anything.

Aaliya gives Rhea ideas to get what she wants

Rhea is naive and innocent when it comes to Aaliya because she blindly believes in what her ‘Booji’ says. When Rhea first broke the news of how she loves Ranbir but that he likes Prachi, Aaliya’s instant reaction was to snatch Ranbir from Prachi because Rhea first laid eyes on him. Basically, she is trying to right what happened wrong with her own self (talking about Purab and Disha here). From using Maya to hurt Ranbir and to making Sanju defame Prachi, it is all Aaliya’s doing.

Aaliya spoils Rhea with her ideologies

Like we mentioned earlier, Aaliya continues to hold the same ideologies and pride of money and status. She tells Rhea that girls like Prachi only want money and look for the same in rich guys. Aaliya has stated countless times that Prachi is a bad person and holds supreme prejudice against her.

Aaliya badmouths about Pragya all the time

Aaliya does not miss a moment to badmouth Pragya whenever she gets the chance. Rhea is bred with a hatred for her mother even though she hasn’t met her. Interestingly, she really loves Prachi’s mother without realising that she actually likes her own mum. We do wonder what would happen if Rhea finds out that Pragya is her mother. Would she still love her or would all that fly out of the window?

Much like how Aaliya tried to manipulate many people in her life, she continues to do the same with Rhea. Using her status as her aunt, Aaliya tries to run the show like a puppet master with Rhea as her toy. She thinks that Rhea should grow and become like her and not like Pragya, which is not surprising. Even Meera has no say in this because, at the end of the day, she is just an outsider and not Rhea’s real mother.

It is interesting to note how not much has changed in Aaliya’s personality but we sure hope that Rhea doesn’t completely turn into her aunt as there is still a lot of goodheartedness present latent in her.

Can You Guess Who This Cute Munchkin Is?