A Married Woman Teaser: A Mysterious Love Story Beyond Time, Law, And Religion

Based on Manju Kapur's book, ZEE5 Original A Married Woman stars Ridhi Dogra and Monica Dogra in an unconventional love story of a lesbian couple. 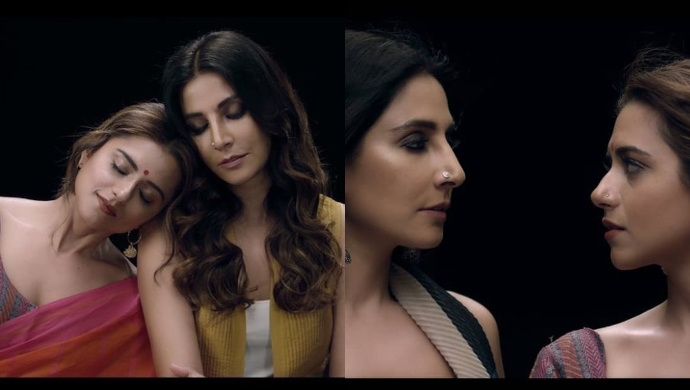 A Married Woman is a ZEE5 Original series starring Ridhi Dogra and Monica Dogra in an unconventional love story of two beautiful people who rise beyond religious, sexual and societal boundaries to find each other. Making their digital debut with this unique series, both the leading ladies portray a lesbian couple Aastha and Piplika. Based on Manju Kapur’s book by the same name, the screenplay is set during the time of political conflict over the Babri Masjid and Hindu-Muslim disharmony in 1992. A verdict by the Supreme Court on Ayodhya case finally healed the 27-year-old wounds in 2019. The romantic love saga released its first teaser in January.

The teaser video starts with Ridhi Dogra’s voice, narrating the events backwards from the 2019 historic verdict by the Supreme Court to 1992 Hindu-Muslim upheaval. The makers have wonderfully used the art of charcoal-sketching on canvas to set the premise of the story. During that time, a hidden love story was flourishing in the hearts of two contrasting women. That is when Gulzar, starts reciting his poem “Aaj Phir Chaand Ki”, in a deep voice-over.

It proceeds with close-up shots of Aastha and Piplika, the former resting her head on the latter’s shoulder, symbolizing their same-sex relationship. Both of them look into each other’s eyes and the shot captures their bond that has gone through tough times, wounded by political, religious, social and societal agitation. Ang Laga De is the lyrics of the background song in the teaser, that translates the feelings of the two women to the audience.

Aastha is a middle-class Delhi woman, who is also a homely daughter, a wife of a loving husband and a mother who loves her children. A professional teacher but a passionate painter, she unexpectedly falls in love with Piplika, who is the opposite of Aastha’s personality. An artist who has always lived life on her own terms, Piplika inspires Aastha to follow her heart and take her own decisions. The two of them go beyond just portraying a lesbian couple, and take you on their journey of choosing unity and pride over religion.

The teaser ends with Ridhi’s voice again, saying that it is a screen adaptation of Manju Kapur’s book by the same name. Directed by Sahir Raza, the series makes the audience curious to know how beyond all boundaries and against all odds did they find each other’s love. Stay tuned on ZEE5 Originals for more updates on A Married Woman.

Broken But Beautiful Season 2: A Recap Of Veer And Sameera’s Story So Far…