Ahmed Masi Wali On Being Called Joey From Friends’ Doppelganger: Hope His Fans Like Me Too

From fanboying over his ZEE5 Original' director Goldie Behl's wife Sonali Bendre in Diljale to being called Joey's lookalike, Ahmed bares it all. 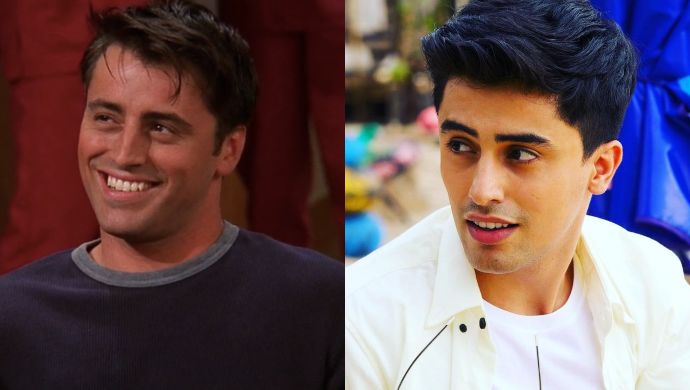 “I am Aarav from REJCTX,” Ahmed Masi Wali introduces me to his character from his upcoming ZEE5 Original web series soon after exchanging greetings. He sets the tone for a free-wheeling conversation and goes on to candidly answer every question I ask. Don’t let his accent confuse you, for here is a boy who tests the water and does a complete check before dipping his toe in the pond. Right from fanboying over his director Goldie Behl’s wife Sonali Bendre in Diljale to taking compliments like being called the famous Friends character Joey’s doppelganger, Ahmed loves his art and more importantly, he is exactly where he wants to be. Read excerpts from an exclusive interview here:

Q. How did REJCTX happen?

REJCTX was very unexpected. I was on a trip to Goa, and I had auditioned a week before I left. They called me and said I’d have to come for a re-audition, usually, I don’t go for re-auditions. When I went there, some 30-35 people were sitting in the room. Goldie Sir entered and told me I was finalized to play the lead character of Aarav Sharma. I was caught very off guard, so I asked Sir that before I say yes or no, I need to go over the character and what exactly is the graph, basically to get a clear idea of the script. He narrated the whole story to me on a one-on-one basis, walked me through the character, then he also mentioned that there would be intimate scenes. I asked him if the show is not selling on sex. He assured that it was a very small portion which was necessary to show the emotions between the characters and I was okay with that.

Q. Was acting always your calling?

I am somebody who was always fascinated by the film world. If you come to my room, you will find all the camera and film equipment. I have even directed a short film, which released on Anurag Kashyap’s banner. I was four when Ram Jaane had released. I’d tie a red scarf around my head and dance/sing for people in exchange for fruit as a reward. My childhood favourite film was Diljale which starred Ajay Devgn and Sonali Bendre. Movies have been with me since I was a baby.

Q. You have been compared to Joey from Friends off late. What’s your reaction to that?

To be honest, I think people say that we have several lookalikes across the world. Friends is a very popular show in India. The resemblance has been drawn several times, I have been compared to Joey, I have been compared to Ali Zafar. Even Enrique Iglesias for that matter. I hope the audience that likes these people likes me too. I hope I don’t get stereotyped in such roles because I am not Joey. I want people to appreciate my work as much as they appreciate theirs.

Q. We hear you reached the sets late…

We had basketball tryouts, music tryouts, my character has to play guitar and all so I had to get that right. Next thing we know everybody flew to Bangkok. I reached the sets a week late. I had a few things in India here because of which I couldn’t go. But when I reached Thailand, they picked me up from the airport and dropped me on the location where they were shooting the climax scene. Now the climax is a very very heavy scene which takes a duration of building on that character. But since I first shot the climax, I had to build on it and then do the rest of the shoot. Goldie Sir, however, came to me and said ‘Masi, I know it’s not fair to you, but you have already joined a week late. There has been a change of location, dates have been changed so we will have to do it.’ I had a four-pages of monologue and it had been changed. So imagine coming on the sets directly, dialogues have been changed, I was fumbling during the rehearsals with Kubbra Sait and Sumeet Vyas. It was overwhelming, of course, but I guess it was my punishment for coming late that in 55 days of the shoot I didn’t get a day off. Goldie Sir trusted us all with and he had faith in us that we’d be able to deliver well. So, I am happy!

Goldie Sir doesn’t like prepping. He believes that once you come on sets, you have your props, it helps you bring spontaneity. I am the opposite, I love prepping. Because the more prepped I am, the more relaxed I am on sets. I didn’t tell Goldie Sir but I had recorded my every dialogue. I had checked if it is coming out well.

Q. How relevant is REJCTX in today’s times?

REJCTX is very relevant today. On social media, we only show the good side of us, the filtered one. We never show our struggles that we hide from everyone. REJCTX reflects on such problems we never speak about including porn addiction, dysfunctional families, gender fluidity and several others. Our web series deals with all such issues, it would have been relevant 20 years ago and will still be relevant in 40 years to come. Because we all face these problems. I had actually written a paper Barriers to Social Inclusion for Today’s Youth which talks about these important issues and published by Ryerson University in Canada. For me to play a part in a show that pretty much talks about these issues were very appealing.

Q. Elaborate on the importance of rap in REJCTX.

The thing about rap is that it is never on a happy note. You pretty much express what is going on inside you through words. For me, I never listen to rap. My co-star Aayush Khurana listens to all kinds of rap – be it Punjabi or Western, he helped me go through the process of, understand where the pauses are. It’d have been very difficult for me otherwise to play the part. Although he doesn’t sing along with me in the show, he helped me tremendously to prepare. I think it came out really nicely. The rap songs, somewhere down the lyrics you can see that this character Aarav is very disturbed. He doesn’t show it to anyone but is really disturbed. There is sort of a romantic angle between my character and Kubbra’s character. Discrepancy crops out between them and he lets out this anger by venting out by rapping.

Watch the trailer of REJCTX to know more:

Q. What was it like shooting with Goldie, Sumeet, and Kubbra?

On the first day of the shoot, I showed Goldie Sir a video which I had shot way before I was called for the auditions and the selection happened. The video was on a song Kuch Aisa Jahan Hum Banaaye from his film Bas Itna Sa Khwaab Hai. So I told him that see Sir I have had a connection with your music and projects even before I worked with you. Goldie Sir is a child at heart, he’d often tell me tu mere se jyada buddha hai. His style of giving feedback is such that the actor doesn’t feel bad and the point is all sent across. Shooting for this long with someone, you tend to get tired but that wasn’t the case with him. He is always so much fun to be around.

Sumeet is a gem of a person, he is someone who always has a smile on his face. Acting-wise, he is very serious and all. But he is very sorted who doesn’t have any starry vibes to him. Established actors like him may expect to be treated differently, but sometimes due to the situation or space of whatever, we wouldn’t get a vanity. But Sumeet would sit in one chair, whether he’d be comfortable or not, for eight-nine hours he would not move. To have such patience, such tolerance at a stage where you can be pampered, I think it’s a quality given by God. Goldie Sir tells me that tumne ek show kya kar liye, tum mein ego aa gaya. I pray that I become as humble as Sumeet, I don’t think I have that quality.

As far as Kubbra is concerned, she is a crazy lady. Not in the wrong sense, but she manages to bring so much of energy on the sets. Even Goldie Sir would miss her on the sets when she wasn’t around, no matter how serious the scene is, she’d manage to find the funny element in it. It was a pleasurable experience working with both of them.

Q. Remix, a show by Goldie did wonders for Karan Wahi. What are your expectations from REJCTX?

Remix was a big hit. My elder sister Tamanna, when she saw me in REJCTX she was like ‘hey this reminds me of Remix.; Then I asked her to check the director’s name for both. Remix is a huge hit, I think Goldie Sir relives his youth through his shows. I don’t expect to become a star overnight. I want people to appreciate the story, the director’s vision. REJCTX is a balance of commercial and content. So I hope people like the series.

REJCTX premiers on ZEE5 on 25 July 2019. In the meantime, tune into ZEE5 to watch a new original film Badnaam Gali starring Patralekhaa and Divyenndhu Sharma.