All You Need To Know About Reshma Pathan Aka The Sholay Girl, India’s First Stunt Woman

Remember the scene from Sholay where Hema Malini goes, "Chal Dhanno?" That stunt on the speeding tonga was performed by Reshma Pathan in the film. 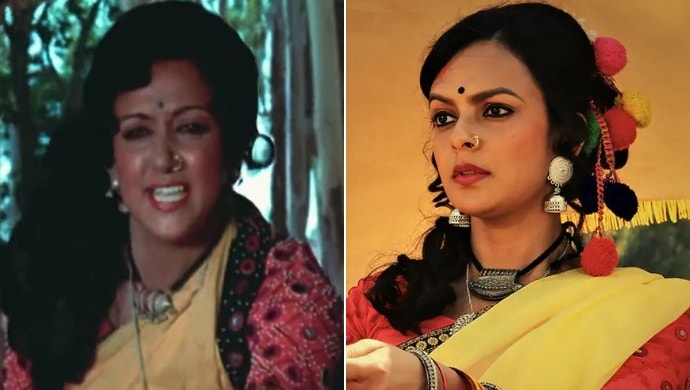 Remember that scene from the film Sholay where the ferocious village belle Basanti is being chased by Gabbar’s men? “Chal Dhanno, aaj teri Basanti ki ijjat ka sawaal hai,” shouted Hema Malini Ji (who played Basanti in the film) at her mare Dhanno in that frame. Many still associate the veteran actress with her stint in the Ramesh Sippy-directorial, but little do they know that it wasn’t the star herself who rode the speeding tonga. It was, in fact, a stuntwoman Reshma Pathan who acted as Hema Ji’s body double in Sholay.

Reminisce the iconic scene in the teaser of The Sholay Girl here:

Besides Jai-Veeru’s iconic friendship and Gabbar Singh’s spine-chilling shades of grey, Sholay is also remembered for street smart Basanti. And in a first, the real Sholay girl (Reshma) is all set to get a web series of her own as ZEE5 has adapted her story into an original. Titled The Sholay Girl, Babumoshai Bandookbaaz actress Bidita Bag will play the titular lead aka Reshma Pathan.

“I fell, hit my legs against an iron rod and passed out,” Reshma described the injuries from her stunt in an interview with a leading magazine. She was even hospitalised for a few days. Another scene from Sholay, where Veeru (Dharmendra) signals Basanti to get her tonga when Gabbar’s men enter the village, was done by Reshma. Even the where a little girl sitting on the road is rescued from marauding horses was performed by Reshma. It was her bold stint in this film that earned her the title of the Sholay girl.

As we prepare for the ZEE5 original to hit the web, we revisit some lesser known facts about Reshma. The veteran artist made interesting revelations in her interviews with a leading magazine and a leading newspaper respectively. Here are the top five of those:

2. Her first stunt was for actress Lakshmi Chhaya in Ek Khiladi Bawan Pattye. She had to slip off a stage, and to everyone’s surprise, Reshma got the action right in the first take!

3. Reshma fell off a clip while acting as actress Durga Khote’s body double in Karz film. Her head bled heavily and she had even suffered serious injuries.

4. Reshma shares a warm rapport with Helen, Hema Malini and other stars. She recalls that Helen would ask her to keep her dabba (lunchbox) aside and share the five-star hotel food with Reshma.

5. Besides bigwigs like Meenakshi Sheshadari, Sridevi, Saira Banu and Dimple Kapadia, Reshma has even performed stunts for the legendary Meena Kumari. The scene where Vinod Khanna and Shatrughan Sinha fight in Mere Apne and Meena Kumari gets pushed and falls was done by Reshma.

Now in her sixties, Reshma is a happily retired stunt woman.

On a scale of 1 to 10, how excited are you to know Reshma’s story? Let us know in the comments box below. The Sholay Girl premieres on ZEE on March 8, 2019.

Are you a Sholay fan? Tune into ZEE5 to enjoy a hilarious spoof of the famous Amitabh Bachchan – Dharmendra film on Zee Marathi show Chala Hawa Yeu Dya now!

#WelcomeHomeAbhinandan: As The Braveheart Returns, Bollywood Celebs React On Twitter