Anjum Fakih Wanted To Give Her Life For Shabir Ahluwalia: I Love You Shabbo! Watch Video 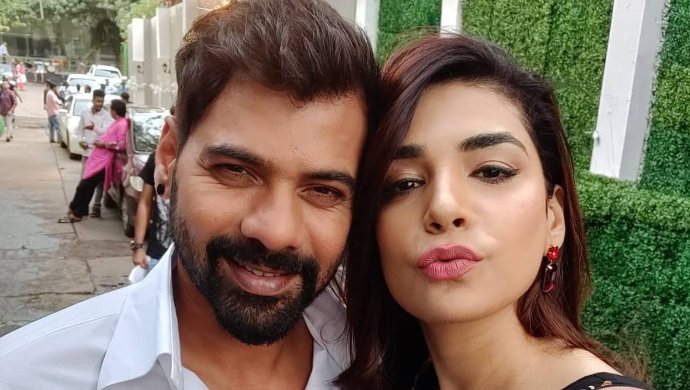 Anjum Fakih is best known for playing the role of Shraddha Arya aka Preeta’s younger sister Shrishti on Kundali Bhagya. On and off the screen, the actress often enjoys a moment or more with her co-stars, showing her crazy side and ensuing a laugh riot. Recently, she shared a behind-the-scenes video from the sets of her Zee TV show wherein she claims to give up her life for Shabir Ahluwalia aka Rockstar Abhi from Kumkum Bhagya. For those unaware, Kundali Bhagya is the spin-off of Kumkum Bhagya, and thus, the characters played by these actors are related in the reel world.

In an Instagram video uploaded by Anjum, she is seen standing at one of the balconies in the studio while Shabir and his co-star Sriti Jha, who is also recording the entire thing, are standing on the ground. The video begins with Shabir laughing into the camera while Anjum jokingly declares he is the love of her life. She further announces that she will jump from the top to prove her feelings for him. ‘I love you Shabbo,’ she shouts as the actors laugh on. Towards the end of the video, Shabir tells Anjum she has won the first prize for her stint, ‘come in the line,’ he says.

“@itisriti she the one who always capture my craziness I love you di and @shabirahluwalia is my #fixerr for life… Many congratulations and best wishes… Love both of ya …,” Anjum captioned the video along with an adorable selfie shared in a post on the photo-sharing platform. Check it out here:

Exclusive: The Verdict’s Elli AvrRam: I Finally Got A Role To Show My…

In case you missed it, Shabir makes his digital debut with Fixerr, a ZEE5 Original and ALTBalaji Original web series. Anjum wished him the best for his first web venture, which starts streaming on ZEE5 from 7 October 2019. Stay tuned for more updates.

Russell Peters Deported Tour: He Returns To India And Begins The Tour With A Bang In Pune