Ankita Lokhande’s BF Vicky Jain Proposes To Her, Actress Replies, ‘I Will Think About It’ 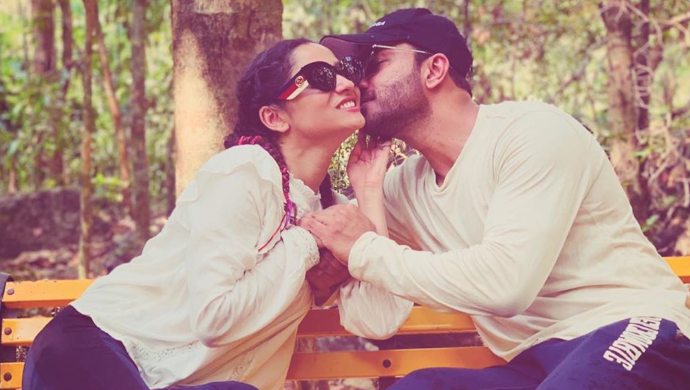 Pavitra Rishta actress Ankita Lokhande is on top of Thursday’s trends list, thanks to her boyfriend Vicky Jain. Ankita’s businessman beau, in a recent set of pictures shared by the star, went down on his knees for her. Clearly, love and romance are in the air for Ankita and Vicky who seem very much ready to take the marriage plunge. In the pictures Ankita posted on her social media accounts, Vicky is seen proposing to her while she throws pretend-tantrums in response. Flaunting a wide, happy smile on her face, Ankita is seen standing beside Vicky and the deeply-in-love couple is dressed in workout casuals amid the greenery.

That isn’t even all. Guess how the Manikarnika actor responded to Vicky’s proposal? “I will think about it,” she said in one of the pictures she shared on Instagram. Check them out here:

When a weirdo meets weirdo🥰🥰🥰 @jainvick

Although Ankita teased that she shall think about the proposal and respond, her co-star Vaibhav Tatwawaadi wants her to say yes already! “Bol de ha say yes,” he commented with heart emojis, while Amruta Khanvilkar, Karan Patel, Sara Khan congratulated the actress on the development. Prarthana Behere, Sana Khan and Himanshu Malhotra too left happy comments on the pictures while fans expressed their excitement too, ‘keep her forever’ read one comment.

Rumours have been rife since the beginning of this year that Ankita is all set to tie the knot with Vicky by the end of 2019. Earlier in April, a video of the two lovebirds kissing each other at a wedding broke the internet and how! The clip was recorded by Ankita’s friend from the television industry, Arjun Bijlani. Recent reports suggested that the couple has bought an 8-BHK property in Mumbai and shall move into their plush abode post a December wedding.

When quizzed about her alleged nuptials, Ankita had told a leading daily, “If it happens, I will let you know and invite you for the wedding. I can’t say anything right now, but there are no such plans, yet. I am just focussing on work at the moment.” Speaking about BF Vicky, she said, “He is a very nice guy. He is a businessman from Bilaspur. Yes, I am in love and you will get to know about it when the time is right.”

Before Vicky, Ankita was in a long-term relationship with Sonchiriya actor Sushant Singh Rajput. The two met on the sets of their show Pavitra Rishta and soon fell in love. However, they parted ways after years of dating in 2016. This year, Ankita made her Bollywood debut in Kangana Ranaut-starrer Manikarnika: The Queen of Jhansi. She received wide acclaims and appreciation for her role of Jhalkari Bai in the movie.

Well, if it is what it seems, congratulations are in order for Ankita Lokhande and Vicky Jain! Can’t wait to hear the wedding bells. Coming back to Vicky and Ankita’s marriage, are you happy about the development? Share your thoughts in the comments box below.