Bhalla Calling Bhalla Review: The Lockdown Sitcom That We Can All Relate To Right Now

Bhalla Calling Bhalla has 10-minute episodes that reveal the funny side of life at home for middle-class Indian families under lockdown. 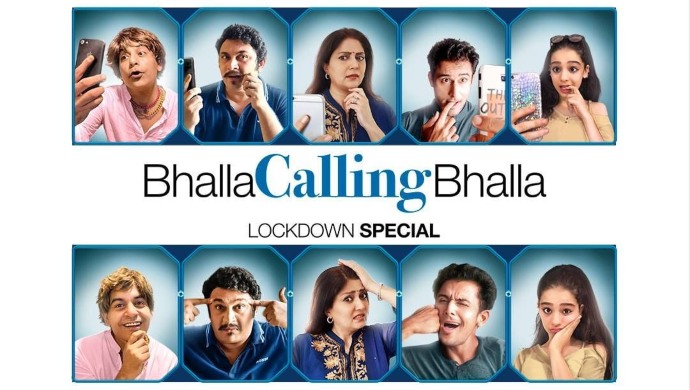 Bhalla Calling Bhalla, is a unique series created entirely under lockdown. The series stars the popular comedic actors Gaurav Gera, Rajesh Kumar, and Lubna Salim along with popular new faces like Gracy Goswami and Leenesh Mattoo. All the footage for this series is shot by the actors in their homes with mobile phones. and put together by the director Deven Munjal and editors Utsav Bhagat and Ankit Kadam. This series explores a new genre of filmmaking in the time of social distancing.

The series begins on the night the lockdown was announced. Lovely Bhalla (Lubna Salim) is in Gurgaon while her husband, Mr. Bhalla (Rajesh Kumar) is on a business trip in Chandigarh. Her daughter Liza/Arundhati (Gracy Goswami) is studying in Jaipur and her son Sahil (Leenesh Mattoo) is a struggling actor in Mumbai. They are all planning to go back to Gurgaon for Lovely’s birthday, but delay their plans. Once the lockdown begins they can no longer go back home. Meanwhile Lovely’s brother, Yogi, gives her a birthday gift only to find out that the shopkeeper he bought the gift from, might have tested positive for Coronavirus!

Read more about the quirky characters on this show here.

This series takes the popular social media format of phone video clips and polishes it to make it look like a complete web series. While only the first four episodes of the series have released, the series holds promise because it accurately depicts life under lockdown with a family that is only slightly crazier than yours.

The scenes of vigorous hand-washing, celebrating birthdays on video calls, rationing alcohol so it lasts longer is all relatable. The series also shows how different people are dealing with the lockdown. While Sahil gets depressed and just leaves the house to sit in his car, Arundhati decides to feed the pets.

Rajesh Kumar who rose to fame playing Roshesh in Sarabhai Vs Sarabhai is playing a modern cool dad in this series, and instead of saying unpleasant poems about his mother, he recites unpleasant poems for his wife and alcohol. Gaurav Gera plays the role of Yogi, a loner who seems to be living under lockdown even before it began.

Lubna Salim as the mother Lovely Bhalla is the most interesting character in the series. But the real hero of the series is the script, which shows that a family continues to share laughs, fight and grow together, even while living apart during the lockdown. Watch this series that is highly relatable and a new form of entertainment.

Watch the first four episodes of Bhalla Calling Bhalla, streaming on ZEE5 and watch out for the next four dropping on 25th May and the last four on 30th May.

Exclusive! Masi Wali On Playing A Double Role In REJCTX 2: It Was A Great…

4 Things Both Your Family And The Bhallas Are Discussing Under Lockdown, Watch…

Ayush Khurana On REJCTX2: As A Pick-Up Line, Girls Are DMing Me 'Maddy, I'm Mad About You'

Sa Re Ga Ma Pa Turns 25: Revisit Some Best Performances By Winners From Past Seasons