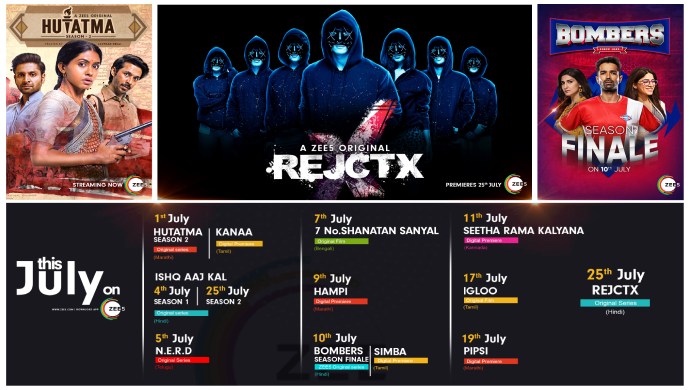 Being the fastest growing OTT platform in India, ZEE5 is putting out an impressive set of shows to binge watch. This July, get set for entertainment across languages with innovative new concepts From Ishq Aaj Kal to Rejctx. July will also witness the return of popular shows like Hutatma for a second season.

For fans of the popular TV Show, Ishq Subhan Allah, here’s something else for you to cheer up about. Ishq Aaj Kal is a web series which is a spin-off on the widely popular TV show. It follows the story of Alia from the show. Watch our for the first season of Ishq Aaj Kal which drops on 4th July. The second season follows soon after on 25th July.

For those who have been enjoying the sports-drama Bombers, there’s a big finale episode coming up. This series around a football team stars Ranvir Shorey, Varun Mitra and Prince Narula in leading roles. Catch up on the previous episodes before the finale on 10th July.

Rejctx is a musical web-series around the music of this generation, rap. The story centred around a group of teenagers who come together to form a rap group. This web series stars Sumeet Vyas and Kubbra Sait. It also has inspiring songs produced by Sneha Khanwalkar. Watch out for this 10 episode series releasing on 25th July. Watch the poster release of this series.

Apart from the web series, ZEE5 has a list of original regional movies lined up. Shanatan Sanyal, is an original film in Bengali which releases on 7th July. Igloo is a Tamil original film slated to release on 17th July. For Tamil viewers, this month will also see the digital premiere of popular movies, Kanaa and Simba.

Stay tuned for all this more of your favourite TV content available on ZEE5. Watch the latest episodes of Jaat Na Pucho Prem Ki and Aghori, the latest television shows on ZEE5.