Code M, starring Jennifer Winget and Tanuj Virwani, recently started streaming on ZEE5. Check out all the reviews of the web series here. 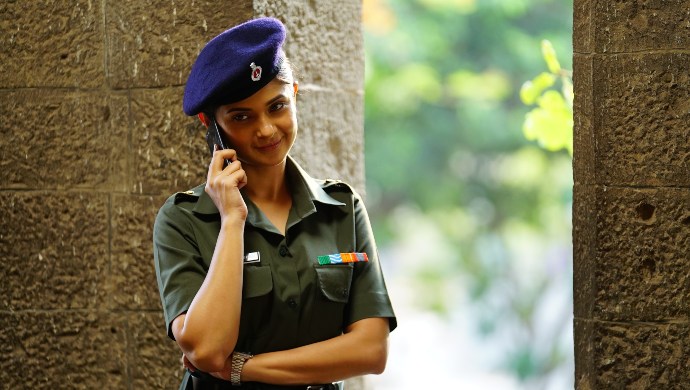 “She is the female version of Shah Rukh Khan,” said a Twitter user about Jennifer Winget’s portrayal of military lawyer Monica Mehra in the recently released ZEE5 and ALTBalaji Original Code M. The eight-episode long web series is a courtroom drama set against an Army backdrop. Tanuj Virwani, seen in ZEE5 Original Poison, plays the role of a legal counsel Angad Sandhu in the digital drama that stars renowned actor Rajat Kapoor as Colonel Suryaveer Chauhan, Monica’s senior. The narrative revolves around a seemingly open and shut case that Monica is asked to investigate since it involves the death of Col. Chauhan’s future son-in-law and two suspected terrorists. Monica’s investigation leads her to open a can of worms that were invisible at first.

The web series has been very well-received by everyone including the fans and critics. Leading portals like Hindustan Times in its review of Code M said, “The eight-episode series is crisp and cracking. Despite the show having a lot on his hands — a cold-blooded murder, encounter, same-sex love, casteism, terrorism and smuggling – it juggles the myriad aspects well.” Koimoi.com rated Code M 3 stars, “The story packs the punch, it’s bold and doesn’t hold itself back from saying what it wants to say. Something which is worth appreciating.” Rushabh Dhruv in his review of Code M for Latestly.com rated it 3.5 out of 5 stars and opined, “Code M is a great attempt in the world of series which sees a unique story with a female protagonist. Nevertheless, it’s a show with a message intact along with a terrific lead like Jennifer Winget. She is indeed the S(h)ero in this one.” Cine-tales.com rated it 3 stars and praised the actors’s performances, “Jennifer Winget looked promising on her digital debut and gave a strong performance.”

Code M was even ranked as the no. 1 web series in the IMDb list.

#CodeM at No.1 on the IMDB list. Congratulations to the entire team…
So if you still haven't watched it, GO WATCH IT NOW!! @jenwinget @samarmumbaikhan@ektaravikapoor @TanujVirwani
Streaming now on @altbalaji & @ZEE5Premium pic.twitter.com/8shGT55ZBA

Catch all the reviews of Code M in the video below:

Twitter also has been abuzz with praise for this thriller series. The story and performances have been appreciated by several celebrities, social influencers and followers.

Got the kind of entertainment as expected! Had a dekko at #CodeM and it indeed is a fast paced thriller with some cool twists and turns! Can’t wait to wrap up the entire series in quick time now! @jenwinget @TanujVirwani @altbalaji @ektaravikapoor pic.twitter.com/MdsPsbOzq0

We just caught a few episodes of @altbalaji's latest series, #CodeM. With @jenwinget, #TanujVirwani and #RajatKapoor's power-packed performances and a gripping, edge-of-the-seat tale, we are already hooked! Streaming on @altbalaji from the 15th of January. @ektaravikapoor pic.twitter.com/21N9jA5N1R

Watched #CodeM. Liked it as it has a backdrop of my hometown #Jodhpur. @Jenifer_Winget you are Amazing and beautiful. Taking eyes of you was little difficult. @TanujVirwani impressed with you since #InsideEdge. Direction could have been better.

Just got done with #CodeM. Got to witness a great story with great performances from everyone, special shoutout to officers shakti and gaurav. Loved watching Jen play an army officer! pic.twitter.com/MyARST6gqb

Jenny is one of those actress with whom whole ITV's fandoms want their idols to work with her.. This girl has some power 🔥 #JenniferWinget #CodeM

finally finished all episodes of #CodeM
what a performance @jenwinget 👏🏻👏🏻

Where you have so many men in uniform,it's a delightful thing to c the woman leading the case ! @jenwinget got the swag right ! #CodeM #JenniferWinget pic.twitter.com/3wL0RvzQVB

Quickly caught the 1st episode of #CodeM and it’s pretty good, @jenwinget is obviously the standout and she’s giving a really controlled performance in this role which I love! Can’t wait to see more, hope shocks as a story. pic.twitter.com/4VSbpZsoR1

What are your thoughts about #CodeM? Tell us in the comments box below.

Indo-China War Trivia: Did You Know Paltan’s Title Track Was Inspired By A…

Broken But Beautiful Season 2: 10 DOs And DON’Ts To Deal With A Breakup