Jennifer Winget impresses as a military lawyer in Code M which comes as a refreshing change amid all the shows headlined by uniform-clad men. 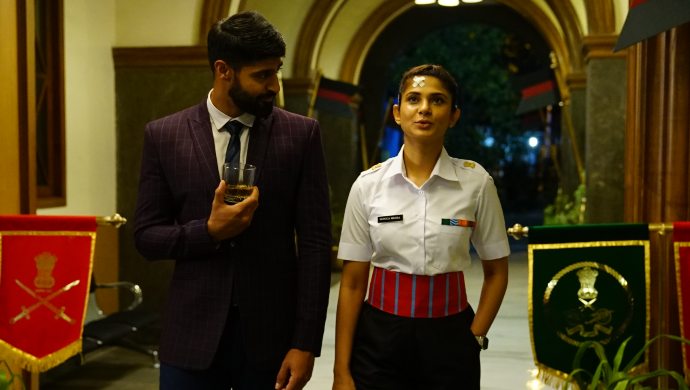 Uri: The Surgical Strike, Simmba, and even the upcoming ZEE5 Original State of Siege: 26/11 all-star uniform-clad men in the lead roles. In a sea of scripts that shows hero taking the centre-stage, Jennifer Winget as a military lawyer in Code M comes across as a refreshing change. Code M is a recently released ZEE5 and ALTBalaji Original digital drama revolving around an army officer Monica Mehra, played by Jennifer. The eight-episode thriller narrates the sequences of events that take place after Monica is summoned by her mentor, Colonel Suryaveer Chauhan (essayed by Rajat Kapoor) to investigate an open and shut case. The twist in the plot involves the death of an army officer and two suspected terrorists. Monica, who was about to go on a leave for her impending nuptials, takes a deep dive only to open a can of worms. The re-entry of her former flame Angad Sandhu, played by Tanuj Virwani, adds a much needed spicy tadka to the happenings.

The series opens to a scene of three men of the Indian Armed Forces chasing down two militants. The militants are taken down in a series of bullets fired but an officer ends up losing his life. The media attention and public glare circling the encounter widens as the mother of the two militants immolates herself publicly. Monica travels from Pune to Jodhpur to carry out an investigation in the incident. The truth is what lies in front of you, Monica is told. But matters are personal for Colonel Chauhan as the officer who died was his future son-in-law Ajay Paswan. Angad comes into the picture as the legal counsel for the other two officers who were a part of the operation that claimed Ajay’s life.

A good cast and a good story work in favour of Code M which would perhaps have fallen flat on its face otherwise. It’d be safe to say that the script is inclusive of some burning issues like homosexuality and caste system but lacks spark. Packed with tons of patriotic fervor, the episodes begin at a slow pace but pick up momentum later much to our delight. A few scenes we feel could have been left at the editing table, but don’t do any harm nonetheless. While Jennifer and Tanuj enjoy well-etched character sketches, there was room for more to be explored when you have a stalwart like Rajat in the frame.

Dressed in an army uniform, standing tall among men of power, Jennifer as military lawyer Monica is remarkable. Given her impressive repertoire of work, playing an investigating officer in the Indian Army is a brilliant addition to her body of work. We have seen Tanuj ace a grey shade character in Poison, thus, it comes as no surprise that he knocks it out of the park as a tough guy Angad. Admittedly, we would have love to see more of the chemistry between Tanuj and Jennifer on the screen. Rajat, is his usual fine self, dishes out a nuanced and layered performance. Aalekh Kapoor and Keshav Sadhna manage to keep us hooked too with their individual stints and interesting roles.

Akshay Choubey needs to be thanked for a great direction. Keeping in sync completely with its genre, Code M is a thriller that will keep you hooked, booked and intrigued. Having said that, the plot does get predictable and assumptive after the first three episodes. The eight episodes seem crisp but another two wouldn’t have hurt in the pack given that there was room for exploring more.

Alongside the story, Jennifer and Tanuj make you want to sit through the entire series, even if you know how it ends!

Get in the mood of patriotism and catch Independence Day movies, here.