Coldd Lassi Aur Chicken Masala Review: A Cute Romcom That Goes To The Heart, Via Kitchen 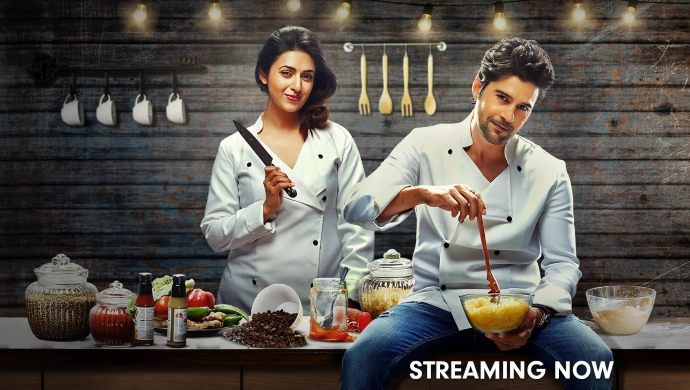 Cold Lassi Aur Chicken Masala Review | Divyanka Tripathi Dahiya and Rajeev Khandelwal‘s kitchen rom-com ends with, “…and they cooked happily ever after.” Except it doesn’t. In the ZEE5 and ALTBalaji Original, Divyanka plays Indie Spice restaurant’s head chef Nitya Sharma. Going by trailer and teasers, it’s easy to expect a glossy, grilling romance between a tightly-wound Nitya and Michelin-starred chef Vikram Singh Chauhan, essayed by Rajeev. Thanks to the rules of entropy, Nitya’s very fragile cocoon of security comes crumbling down when her ex-husband Vikram takes over as the new boss of her workplace. Given their shared past, only a fool wouldn’t expect them to reach out for the same ladle to stir soup, pun intended.

Coldd Lassi Aur Chicken Masala does a surprisingly good job in balancing parenthood and work, for an ambitious, single mother. Nitya doesn’t waste her recipes and resources on anyone who doesn’t adore them. “Aao toh welcome, jao toh bheed kam,” is a simple mantra she chants, storming in and out of the kitchen and so does the customer, mostly out of her restaurant. She doesn’t behave a certain way, even if it threatens her livelihood. Nitya is colder than any item in the restaurant’s refrigerator, which also keeps owner Revati (Maninee Mishra) out of her way. But even good neighbour and shrink Karan Kapadia (Priyanshu Chatterjee) is unable to thaw her iciness. Everyone, except the wisecracking son Vivaan, picturized on young Vidhaan Sharma, cuts through the chills. The doe-eyed boy is the centre of Nitya’s universe as she juggles between preparing him for being on his own in the real world and making his favourite cheeseburgers.

Vikram, on the other hand, is a suave and classy world-famous 2 Michelin star chef who seems to have outgrown his middle-class rebel personality. Chancing upon lip-smacking recipes while backpacking through Europe, his flamboyance has a reputation of its own. In the eight long years that Vikram and Nitya didn’t cross paths, the former went from rags to riches, while time stood still for the latter. A series of shout battles and cold shoulders in the freezer keeps the rest of the cast around Divyanka and Rajeev guessing.

Directed by Pradeep Sarkar, Coldd Lassi Aur Chicken Masala paints realism in the world of surrealism. The director respects Nitya’s ambition enough for her to fight the love of her life over it.  The web series is focused on the chemistry of two longing hearts and of the kitchen, too. Do NOT watch Coldd Lassi Aur Chicken Masala on an empty stomach. A major portion of the digital drama oscillates between luscious-looking biryani, mouth-watering tiramisu and cupcakes, and lots of fusion food. The camera lingers long enough to let your hunger pangs kick in, hard and irreversible. Not just the food, but even the intro scene where the cooking process is explored to the last drop of oil in the pan to dicing, chopping, slicing, peeling, garnishing, plating, etc makes you book reservations.

Besides the yummy delicacies, Divyanka and Rajeev’s sizzling chemistry is a heatwave. Seriously. Stand the heat or stay out of the kitchen. Literally! Despite the personal rivalry, professionally, Vikram and Nitya are a match made in heaven. The passion in their courtship and the kitchen counter knows no bounds, involving us emotionally. Divyanka is phenomenal as the short-tempered chef and a mother. Rajeev exercises a certain restraint as the restaurant owner that’s maddeningly alluring. Although we are not sure if his Bhopali charm is something we can resist either! Priyanshu is a cold breeze and a delight to watch as the easy-peezy psychiatrist. We also feel Vidhaan has all the potential to play matchmaker between his separated parents, provided he doesn’t get too occupied with Tara.

All the light moments in the series mostly belong to Tanvi (Madhu Sneha) and Kayzad (Mrinal Dutt). If the kitchen belongs to Nitya and Vikram, their respective BFFs are totally turning up the heat in the freezer. Madhu and Mrinal’s melo-comedy banter, in fact, is a saviour every time the lead pair is headed for a downer. Barkha Sengupta essays Seema, the woman who quite changed things for Vikram and Nitya, good and bad both. Our eyes are so glued to her character graph in the coming episodes – do we hate her already or wait some more? Maninee Mishra has always had impeccable timing, she uses it better in Coldd Lassi Aur Chicken Masala. And Saloni Khanna’s fashion validation as Manira is what we are living for!

A tailor-made romedy, the digital drama discovers dark corners of the human heart while quickly switching to the humour in Vikram and Nitya’s passive-aggressive behaviour. Vikram, of course, has Nitya and Vivaan’s best interests at heart. But will they get a happily ever after on their own terms or cook one with secret ingredients?

The emotional details of Vikram and Nitya’s respective struggles are a slice-of-life. The web series doesn’t bifurcate the narrative to challenges of being a single mother and bitter, bad romance. It stands up to tell life-size scenarios without resorting to sympathy, in a somewhat unique manner.

Coldd Lassi Aur Chicken Masala tells us there is no cookbook to life.

Share your view of the web series in the comments box below.

If you love history, you can now binge-watch episodes of Jodha Akbar on ZEE5, also available in Tamil and Telugu.