Kareena Kapoor Khan got sister Karisma to fill in for her on Dance India Dance this weekend. Suffice to say, we are still reeling under the Lolo fever 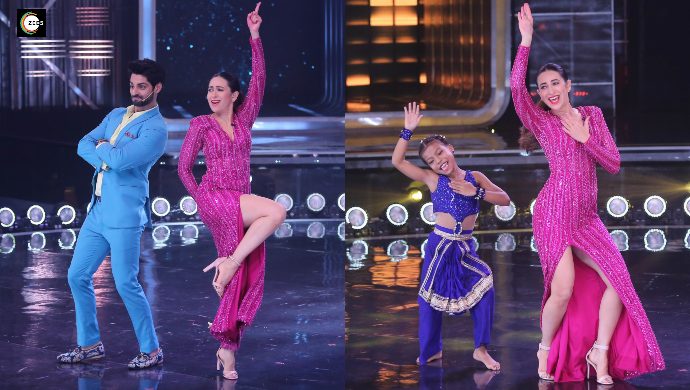 Kareena Kapoor Khan went missing from the judges’ panel of Dance India Dance 7: Battle of the Champions this weekend. To fill in for her, sister Karisma Kapoor stepped up as the guest judge on the Zee TV dance-based reality show. After watching the episodes, suffice to say we are still reeling under the Lolo fever. If Bebo’s sensuous moves, entertaining puns and drop dead gorgeous style file is a complete weekend bonanza, Lolo’s 90s nostalgia, silly banter with host Karan Wahi and invaluable anecdotes from her career were full of thrills. Joining her in the revelry were co-judges Bosco Martis and Raftaar. For those of you who couldn’t catch the episodes, fret not, we have rounded up some major highlights from the show for you.

Catch all the latest episodes of DID 7 here:

Keeping up with sister Kareena’s glam quotient, Karisma opted for a blingy magenta pink beaded gown by Zara Umrigar. She accentuated her outfit with middle-parted hair tied into a sleek ponytail and Gianvito Rossi heels. A pop of red, minimal accessories and blush palette rounded out the look to the nines. As for Bosco, the choreographer stunned in a brown Sarath Krishnan creation while Raftaar kept up with those funky vibes in a grey and red bomber jacket. Karan, on the other hand, stunned in a blue and yellow suit.

To begin with, Karan had an EPIC reaction when he found out Karisma and not Kareena will be judging this weekend’s episodes.

His silly flirty banter with Karisma enthralled us all, as he even tried to perform some difficult dance steps to impress the actress.

Karisma treated us to a major throwback to the 90s as she recreated the iconic ‘dance of envy’ from her hit film Dil Toh Pagal Hain. She was joined by Mansi of West Ke Singhams who danced alongside her as Madhuri Dixit from the original. Besides, the Bollywood starlet shook a leg to her evergreen chartbusters from Coolie No. 1, Hero No. 1 amongst others on the show.

Keeping up with their dhamakedaar performances every week, the Unreal Crew from North Ke Nawabs performed a special act on saving trees.

Another contestant from North Ke Nawabs, Hardik Rawat delivered dancing brilliance as he grooved to Ishq Wala Love from Student of the Year. He scored a hattrick as he walked away with 100/100 thrice in a row.

Pranshu and Kuldeep of West Ke Singhams ‘wow’ed the judges with their mesmerizing performance on Surmaii Ankhiyon Mein from Sridevi’s movie Sadma.

Akshay’s ‘Muqabla’ compelled the judges to give him a standing ovation. Catch his phenomenal dance on the Prabhu Deva number here.

Which was your favourite performance from this weekend’s episodes of Dance India Dance 7? Tell us in the comments box below. Stay tuned for more updates about the #BattleOfTheChampions.

You can now watch Dheeraj Dhoopar as Karan Luthra in Kundali Bhagya, anytime, anywhere only on ZEE5!