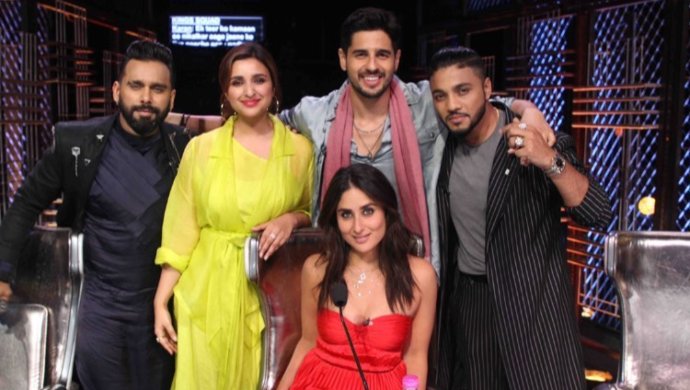 Week after week, competition on Dance India Dance 7 is getting narrowed down as contestants get eliminated. With tough neck-deep competition, it’s difficult to decide who missed the mark and who hit the bull’s eye as no zone is leaving any stone unturned to impress the judges Kareena Kapoor Khan, Bosco Martis, and Raftaar. There is tension, but then, there are celebrities like Sidharth Malhotra, Parineeti Chopra, Diljit Dosanjh and Kriti Sanon whose infectious energy only amps up the josh of all teams. This weekend, Jabariya Jodi and Arjun Patiala film stars, respectively, visited the #BattleOfTheChampions. Needless to mention, there was a lot of dancing, but dhamaal and unlimited fun too. Without further ado, let’s take a look at the major highlights of Dance India Dance 7 20-21 July 2019 episodes.

By now dear readers, we hope you know the drill. We always bask in the beauty of Kareena’s bewitching beauty and enjoy Bosco and Raftaar’s uber-funk style statements on the show.

Always such joy shooting with this crew💖 📸 @arshaangandhi

Bosco stuck to Sarath Krishnan’s dapper creation this weekend too while Raftaar only sent the swag-meter soaring in striped blazer suit paired with white chunk sneakers and calf-length socks.

Moving on to the performances, Unreal Crew managed to strike gold with a mind-boggling act while Akshay of West Ke Singhams gave a dhuadhaar performance, quite literally.

After watching @unreal.crew’s outstanding performance, 🙏🏻 was the only reaction of our very own Diljit Paaji! Tune in to Zee TV this Sat-Sun at 8 pm to watch #DanceIndiaDance – #BattleOfTheChampions. #DanceKaJungistaan #NorthKeNawabs

Diljit was dumbfounded after this performance. All that he could manage to say or do was just join his hands and bow down before the North Ke Nawabs’ crew.

He’s probably got no bones in his body, watch a glimpse of this West Ke Singhams’ contestant’s spectacular performance here and you’ll know what we are saying.

Malka of East Ke Tigers is in incapable of delivering an okay performance, she only knows to do her best.

Can you ever imagine that someone can make a piece of paper dance? Undoubtedly a magical performance ✨ Tune in to Zee TV tonight at 8 pm to watch #DanceIndiaDance – #BattleOfTheChampions. #DanceKaJungistaan #WestKeSinghams

Every moment of West Ke Singhams’ jodi Pranshu and Kuldeep made us go WOW WOW WOW.

Besides the contestants, the judges too had a blast with the guests. Sidharth finally got to dance with Kareena on Mera Naam Mary while Diljit dedicated Udta Punjab song Ikk Kudi to his Good News co-star.

Kriti and Raftaar revisited the actress’ very first song Bollywood song, co-incidentally which had a rap segment by the talented artist. Parineeti, on the other hand, shook a leg with choreographer Bosco.

Are these Jabariya Jodi beats making your wanna hit the dance floor? Tune into Khadke Glassy here and get the grooves going! Don’t forget to give a shoutout for your favourite performer of the weekend in the comments box below.

Next weekend on Dance India Dance 7, Malaika Arora shall be seen as the guest judge alongside Badshah, Bosco, and Raftaar. Stay tuned for more updates about the #BattleOfTheChampions.

You can now watch Dheeraj Dhoopar as Karan Luthra in Kundali Bhagya, anytime, anywhere only on ZEE5!