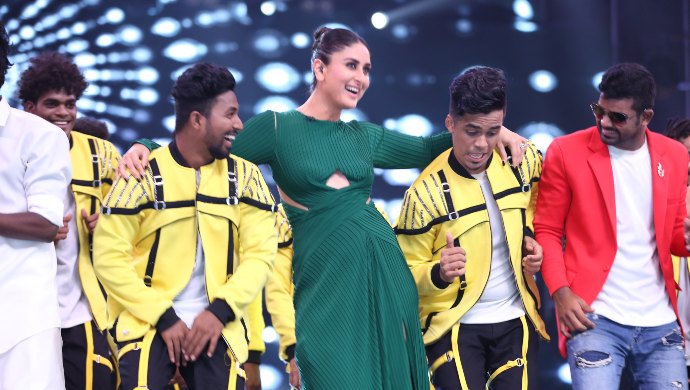 Dance India Dance 7 has been making a splash and dominating headlines ever before the Zee TV dance reality show premiered on the channel. The seventh season #BattleOfTheChampions of India’s coveted platform for dancers returns with Kareena Kapoor Khan, Bosco Martis and Raftaar as the judges while Karan Wahi reprises his host act after DID Super Moms – Season 2. At the premiere of Dance India Dance 7: Battle of the Champions, the judges, including TV debutante Kareena, had a blast with the contestants as they all shook a leg to Chaliya, Mauja Hi Mauja, High Heels and even Lungi Dance. After an entertaining warmup, the battleground #DanceKaJungistaan was ready for some hard-core dance action and stellar performances in the third and fourth episode.

As we informed earlier, Kareena has been having a total blast on her very first small screen outing. The 38-year-old is busy on a work-cation in London as she juggles between her professional commitments and quality time with family and friends in the English capital. The stunning diva is also shooting for DID episodes and flew back to Mumbai for the weekend, in the last two weeks. Dressed in a forest green long-sleeved Tadashi Shoji couture, Kareena teamed the glamorous outfit with nude lips, Aquazzura heels and a sophisticated high bun.

Grooving to a Hum Dil De Chuke Sanam number, The Soul Queens from South Ke Thalaivas owned the battleground once again with their prowess.

2. The Unreal Crew scared Kareena with their spooky act

The Unreal Crew set the stage on fire with their spooky performance! Tune in to Zee TV tomorrow at 8 pm to watch which team will enter the safe zone. #DanceKaJungistaan #DanceIndiaDance #BattleOfTheChampions #NorthKeNawabs

The Unreal Crew from North Ke Nawabs is living up to their name, as they continue to perform unrealistic concepts and dance acts. Check out the video and you’ll know what we are trying to say!

3. Hardik Rawat was the ‘King’ of all performances

Kings United's Hardik Rawat has raised the bar! Also, wishing @hardik.rawat a very happy birthday. Tune in to Zee TV on Saturday and Sunday at 8 pm to watch the toughest dance battle India has ever seen. #DanceKaJungistaan #DanceIndiaDance #BattleOfTheChampions #NorthKeNawabs

Soon after Hardik finished the dance stint, judge Bosco got up from his seat and danced around the North Ke Nawabs contestant, clapping and cheering for his fantastic performance. Safe to say, there were ‘Jay-Jaykara’ in the air for the King’s United champ.

Yep, it was the weekend of Karan Wahi entering Dance India Dance 7. He replaced the earlier host, Kundali Bhagya star Dheeraj Dhoopar, and enthralled the judges, especially Bebo with his quirky one-liners.

A lot more dancing and helluva fun were involved this weekend on Dance India Dance Season 7. Which was your favourite performance from 29-30 June’s episodes? Tell us in the comments box below.

Bhavani Iyer: No Kainaaz, No Sarabjit Should Suffer For No Fault Of Theirs