As a part of the Sports Week Special, Dance India Dance 7: Battle of the Champions contestants paid a tribute to MS Dhoni and other legends. 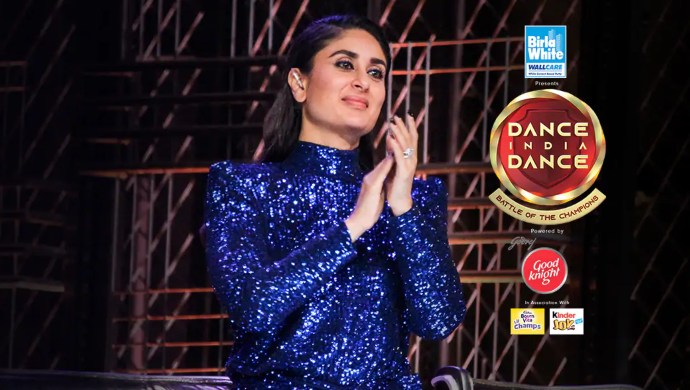 All hearts on Dance India Dance 7 were bleeding blue this weekend. The Zee TV dance-based reality show had a Sports Week Special episodes dedicated to the heroes from various spheres of life. After a warmup in the first weekend, the four zones pulled up their socks and geared up for #BattleOfTheChampions on Dance India Dance. Last week we saw contestants groove to the hit chartbusters of Govinda, Shah Rukh Khan, Saif Ali Khan and judge Kareena Kapoor Khan amongst others. This weekend, they paid a tribute to the birthday boy and former captain of the Indian Cricket Team Mahendra Singh Dhoni and others real life heroes. Judges Bosco Martis and Raftaar were ‘bling on’ with their fashion statement and so was Kareena. The trio along with the mentors and the contestants offered a weekend bonanza, to say the least!

Before we move on to picking the best performances of this weekend, can we take a moment to bask in just how drop dead gorgeous Kareena looked in a deep blue Raisa Vanessa outfit? The blingy outfit had a cute bow accentuating Bebo’s curves and a thigh-high slit adding to the oomph factor. Wavy pulled back hair, nude makeup, and shimmery eyes only took the style quotient a notch above and if that weren’t enough, her pink strappy heels were simply stunning!

Besides the glam goddess, we are totally crushing over Bosco and Raftaar’s dapper style statements. If Bosco’s sharp but playfut blazer look had a sattack wala attack vibe, Raftaar’s sequinned bomber jacket was the show stealer. Check out both the looks here:

Moving on to the performances, Hardik Rawat, the Unreal Crew, Malka Praveen, N House Crew, and Pranshu-Kuldeep were the stars of this weekend. Check out their performances here in case you missed it:

As Bosco can be seen saying in the video above, “I wish I can do even 1% of what you did” after Hardik’s performance. The North Ke Nawabs contestant is hitting it out of the parik with a super energetic performance one after another.

To the cricketer par excellence, a small tribute from us to the legend! Happy birthday @mahi7781! #DanceKaJungistaan #DanceIndiaDance #BattleoftheChampions #NorthKeNawabs

Former Indian caption Dhoni brought in his 38th birthday yesterday amid the ongoing ICC Cricket World Cup 2019. N House Crew honoured the celebrated cricketer with a special performance and voila, made us all bleed blue.

This will surely bring tears in your eyes! #WestKeSinghams will pay tribute to the real heroes of our lives. Tune in to Zee TV tonight at 8 pm to watch India's biggest dance battle. #DanceKaJungistaan #DanceIndiaDance #BattleoftheChampions

Pranshu and Kuldeep of West Ke Singhams dedicated their dance stint to the real life heroes both a sportsman and an army jawan. Their splendid delivery moved us to tears and left us in awe of the duo.

4. There is no stopping Malka Praveen

Malka Praveen of North Ke Nawabs has been stunning with her dancing skills weekend after weekend. The little girl packed a powerful punch with her high-octane performance as she performed Lord Shiva’s dance form.

5. The Unreal Crew is the new Snooker champion

Did you know: The Unreal Crew is also the Snooker Champion! Don't believe us. Watch this performance! #DanceKaJungistaan #DanceIndiaDance #BattleOfTheChampions #NorthKeNawabs

They truly are living up to their title for their performances have just been ‘Unreal.’ A stellar show by the North ke Nawabs contestants bowled over Kareena, Bosco and Raftaar. Never has the concept been attempted on television, quipped Bebo.

Whose performance did you like the most this weekend on Dance India Dance 7? Let us know in the comments box below. Next weekend, guest judge Karisma Kapoor shall be seen filling in for sister Kareena’s absence. Are you excited to see Lolo return to the screens?

In the meantime, catch Dheeraj Dhoopar as Karan Luthra in Kundali Bhagya, all episodes streaming on ZEE5!

Why Gold Tamba From Batti Gul Meter Chalu Is A Song You NEED To Watch!