At the High Five on ZEE5 awards, Bhawana Somaaya calls Dheeraj Dhoopar 'The Salman Khan Of Television' and chats with him about his life and work. 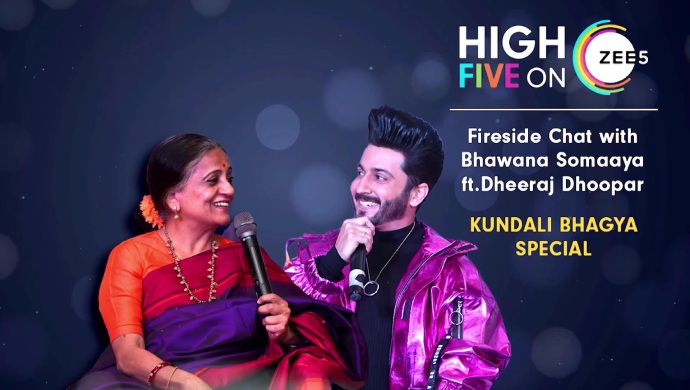 The High Five On ZEE5 awards celebrates the most-watched content on ZEE5. It’s no surprise that the audience favourite Kundali Bhagya, won the award for the most-viewed TV show. Dheeraj Dhoopar who plays the popular character of Karan Luthra on the show, collected the award on behalf of everyone.

Watch a snippet of his award acceptance speech here.

After accepting the award he sat down for an interview with reputed journalist Bhawana Somaaya which covered professional and the personal aspects of his life. Dheeraj begins but by explaining how much he relates to his character on the show. Dheeraj reveals that he was the school cricket team captain and also reacts to situations the same way as Karan does on the show. He also goes on to explain why he is different from Karan. He also goes about explaining a funny reason behind why he is behaving like an anti-hero on the show currently.

Dheeraj mentions about loving his wife Vinny Arora and their dog, Oreo, even though he cannot give them as much time. He says that every weekend he makes sure to be only with them. He reveals that it upsets him when people think Preeta (Shraddha Arya) is his wife. The actor also speaks about his chemistry with co-star Shraddha Arya and says he doesn’t have to discuss the scenes with her and they do it so well that they rarely have any retakes.

Dheeraj Dhoopar also mentions that he styles himself and other actors on the show because he is a fashion designer. He reveals that he joined fashion designing because he was the only boy in the entire class. Dheeraj realised he has a knack for fashion designing as is clear from his outfit. Dheeraj has a collection of around 70 jackets. He also has a collection of wallets, accessories and shoes. Even though he is not into into watches but his outfit paired with the Apple watch completes the look.

Watch this fun and insightful chat on ZEE5.

Watch Bhawan Somaaya take another interview with Gul Panag and Spurha Joshi from Rangbaaz Phirse at the High Five On ZEE5 Awards here.