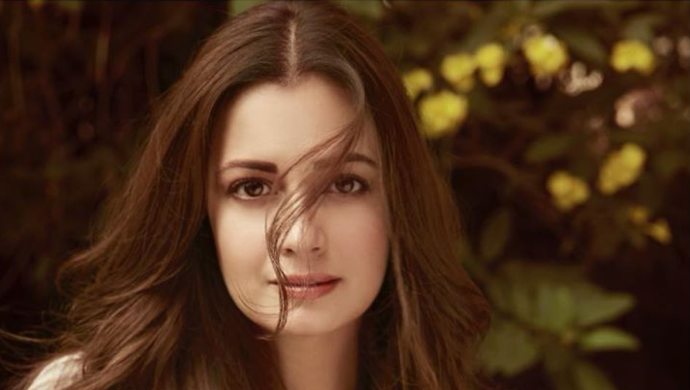 On 9 May 2019, I had the absolute honour of meeting the bright, beautiful, and brilliant Dia Mirza Handrich. She had returned to Mumbai after wrapping up the shoot of her digital debut drama, ZEE5 Original Kaafir in Himachal Pradesh. Wearing an easy-breezy floral blue dress paired with vibrantly printed flats, Dia walked into a room at her Mumbai office where my colleague and I were seating and naturally, our heads turned towards her way. “I am so sorry, you had to wait,” were her first words to us as she returned from the Bhamla Foundation Press Meet. In response, we smiled politely and greeted her, while my eyes remained transfixed on her mesmerizing beauty and gleaming eyes. As an entertainment journalist, one is used to the waiting game (no offense). However, there was something about her that struck me and stayed, in that very moment, I knew it was a privilege to interview her.

With Fridays writing on and off fortunes, stars have come, conquered and ceased to be visible. In the case of Dia, she has a limited filmography and screen appearances to her credit but never stopped being relevant. “I don’t give in and I don’t believe in giving up. This comes naturally to me, I know no other way,” she once quoted. Not afraid to call ‘a spade a spade,’ Dia has never hesitated to throw her weight behind ideas and values she truly believes in. She was born on 9 December 1981 in Hyderabad to German interior designer Frank Handrich and Bengali mother Deepa. After her parents separated, Dia adopted her step-father Ahmed Mirza’s last name. Understanding the vulnerability attached to her profession, Dia proudly identifies herself as an Indian and fails to understand the strong emphasis on religion. It is this very value system that makes her a true embodiment of beauty with brains.

Dia debuted with Rehnna Hai Terre Dil Mein opposite R. Madhavan only to forever steal our hearts as Reena Malhotra. Not limiting herself to a side chick besides a handsome hero, Dia established her own production house ‘Born Free Entertainment’ to support the kind of cinema she would want to be a part of. Earlier this year, Dia was amongst the 17 global public figures appointed by UN Secretary-General Antonio Guterres as the new advocates for Sustainable Development Goals. Striking a balance between entertainment and her duties to the environment, Dia has been actively supported causes including female foeticide, single-use plastic ban, cleanup drives, HIV awareness, adoption of cancer patients every year amongst many others. Given the situation of climate change we are faced with, an activist like Dia is the one the world needs.

From voicing her opinion on the Sardar Sarovar Project to tensions between India and Pakistan to camps in Bollywood, Dia has always been transparent. “Who is an A-lister? Someone who does a film with Shah Rukh Khan, Salman Khan or 10 films a year with big banners? Those are not my aspirations. I’m content with what I have. When I started off, I didn’t even know what I wanted. I’ve only discovered myself some five years ago. It reflects in my choices,” she once said in an interview.

The actress has always maintained that her mother has been her harshest critic. Speaking about the one cherished gift she received from her, Dia promptly answered, “perspective.” “The most powerful gift my mother has given me is the gift of perspective,” revealed the former Miss Asia Pacific 2000 title winner in an exclusive interview with us. She elaborated, “It’s very easy, she has always told me, to get consumed and contained by our immediate lives. It’s very important to remember that you are affected by infinity. She gifted me the moon one birthday, as an example. I was like, ‘But it’s not mine.’ My mother replied, ‘Who said? It’s yours from today. Every time you look at it, know that it’s yours.’ That’s context, that’s perspective.”

In an industry that thrives on gloss n’ glamour, Dia is a big promoter of sustainable fashion, way before the country took note of home-made clothing and garments that can be recycled. It also highlights an important fact that she is not afraid to adapt to changing times. Just like she doesn’t step back from saying on record that the film industry doesn’t have enough female storytellers. “Early on in my shoot, I realized that Sonam Nair is only the second female director I have worked with, in a career spanning 18 years. That’s a really sad statistic. It is not a conscious choice, we just don’t have enough female storytellers,” Dia revealed to us.

Not the one to be boxed up and pushed aside, Dia rises every time, like a phoenix from the ashes. She is here to stay. Here’s wishing Dia Mirza a very happy birthday!

Catch her in the latest episode of Not Just Supper Stars here: