After 11 years of togetherness and 5 years of marriage, Dia Mirza today announced separation from husband Sahil Sangha. Inside, their joint statement. 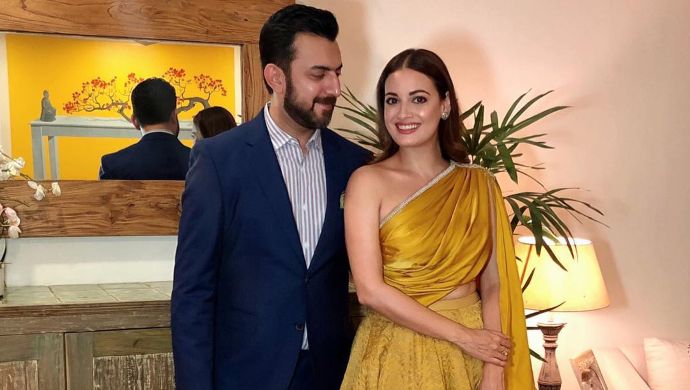 Thursday sent many in shock as Bollywood actress Dia Mirza and husband Sahil Sangha announced their separation after five years of marriage. The couple, who had been together for 11 years, released a joint statement on social media sharing the news of their split. ‘We remain friends,’ asserted Dia and Sahil as they ended their marital relationship. The reason behind the Kaafir actress and her producer husband parting ways is still unknown, but the statement further reveals that neither Dia nor Sahil shall be commenting on the matter further.

It indeed is disheartening to learn that one of our favourite couples has called it quits, but very few know they had the cutest love story ever.

Dia was born as Dia Handrich to Deepa and Frank Handrich on 9 December 1981. Her parents separated when she was four, and her mother later married Ahmed Mirza, thus, Dia Mirza. She started her career by winning the Femina Miss India and Miss Asia Pacific titles in 2000 and followed up the success story with Rehnaa Hai Terre Dil Me. The 2001 movie, although a box office flop, left a lasting impression in the hearts and minds of Dia’s fans. Thereafter she acted in several movies, while also throwing her weight behind social causes she believes in and expanding the business acumen as a producer.

Sahil, a marketing and advertising professional, is a New York University graduate and has assisted on 2007 film Salaam-e-Ishq. It was love at first sight for Sahil and Dia, at a meeting set up by Vikram Phadnis several years ago. Apparently, Sahil wanted Dia to consider a script and thus, the visit. However, it wasn’t until later the two realized their feelings for each other. After several outings in the public eye together, at parties, functions, and events, Dia finally confirmed to dating Sahil in 2011 at the launch of her film Love Breakups Zindagi. Interestingly, the movie was directed by Sahil himself and released under their production banner Born Free.

However, Sahil kept Dia waiting to pop the question, but made it worth the while. In an interview, she had earlier told a leading entertainment daily that the proposal came after a long wait, in April 2014, but was extremely special as Sahil had promised Dia. He asked her to marry him, in the middle of the Brooklyn Bridge in New York, in an utterly romantic way. Sahil went down on his knees, confessed his love and popped the ring in front of a crowd clapping happily for them. With tears in her eyes and a smile on her face, Dia said yes.

Later that year, on 18 October 2014, Dia and Sahil tied the knot at New Delhi’s Chattarpur Farm. Talking about their marriage, Dia had told a daily, “I am very happy. Ours was a simple Arya Samaj wedding ceremony. The vows were clearly explained to us. It was wonderful because it was good to be conscious of what you are going through, and what are the vows that you are exchanging. It was a dream wedding, in the best possible way.”

Speaking about his lady love, Sahil had once said in an interview to a daily, “What I love the most about her is that in one word, she is pure. She is very giving and all heart, which is also a problem as then you need to take care of your heart. She lights up a room as soon as she walks in.”

To see a couple so loving and affectionate like Dia and Sahil break up is indeed heartbreaking, we wonder why some love stories end this way. As they both set out on their respective journeys and continue to be there for each other with love and respect, we wish them nothing but the best.