EXCLUSIVE! Aahana Kumra: I Have Promised Myself That I Don’t Want To Repeat Characters

Ahead of the world digital premiere of her film Yours Truly on ZEE5, Aahana Kumra sat down with us for an exclusive chat about films, love and more. 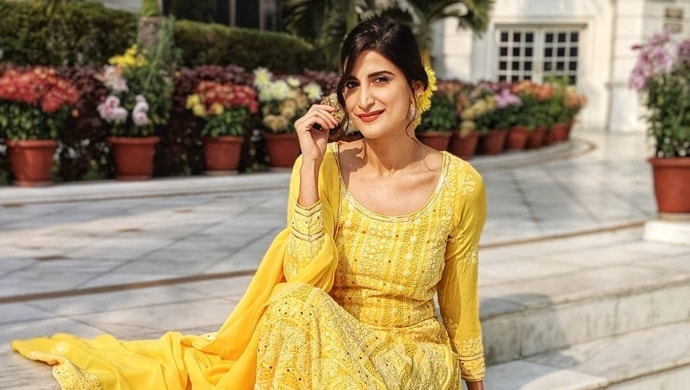 A graduate from the prestigious alma mater of acting, Whistling Woods International School of Acting, Aahana Kumra is one of the few who preaches what she practices. Chirpy as ever, flashing that radiant smile beating her highlighter glow, the actress sat in front of me in a meeting area of a plush Mumbai hotel. She had been doing back to back interviews and promotions on her birthday eve, for her upcoming film Yours Truly. It was about  5 pm. In my five hours of wait, never did she let that curve leave her lips as her quick-wit replies made everyone sit up and take notice.

Yours Truly has been directed by Sanjoy Nag, a National Award-winning director and stars Soni Razdan in the lead role. I have heard and read only good things about both. And the film too. Wearing black and white striped co-ord set separated by a black bustier, Aahana was dressed in a chic and comfortable attire for a roomful of journos waiting to hear about her next venture. While I asked my questions, her tone ranged from excitement, surprise, confidence and disbelief too. As she answered, I understood why she is called a ‘bold’ actress, she wears her heart on her sleeve but only has eyes for her own self.

I asked Aahana if it’s her conscious choice to pick gritty roles (cue on Lipstick Under My Burkha, The Accidental Prime Minister, Rangbaaz, etc) and she smiles before replying, “These offers come to me. Thankfully these people have seen around me.  I have grown up in Lucknow. I grew up in a society where I saw a girl like the character that I played in Rangbaaz. When I was playing Leela in Lipstick Under My Burkha, my relationship with my parlour wali is great so I took inspiration from her. And my mother is a cop so when I played a cop I took inspiration from my mum, I grew up in a station. My mother was the in-charge of Hazratganj police station. Thankfully whatever characters I have played, I have seen those people around me. I have been able to draw inspiration from them. And I definitely have promised myself that I don’t want to repeat characters. Most definitely, I don’t want to repeat characters.”

This made me ask her if she believes the charm of a character may be lost with repetition, she responds in agreement, “I want to be able to play those characters with complete respect and honesty but various characters. I mean what’s the point, it’s so easy it’s going to come to you naturally. What are you going to do more with it? Kar liya na aapne (You have done it no)? Move on, do something with your life. Come back to it maybe some point in your life when somebody is repeating it but there is no point. I remember after Lipstick Under My Burkha everyone was offering me roles, arey bold character hai, she has to show tits and ass. I was like, Boss I have done it na. Why should I repeat it? I have done the same thing in Lipstick. Why will I repeat this? Thankfully they think twice before coming to me because I’ve said no to them. As far as you have patience and you can wait, it will come to you.

Class Of 2020 Trailer: A Series That Captures All The Drama Between High School Corridors

Kundali Bhagya's Abhishek Kapur Has An OCD, But It's Not What You Think