Exclusive: ‘After My Last Breakup, I Was Told I’m Behaving Like Sameera,’ Says Harleen

Harleen Sethi opens up about relationships and compares her own experiences with her character Sameera from season 2 of Broken But Beautiful. 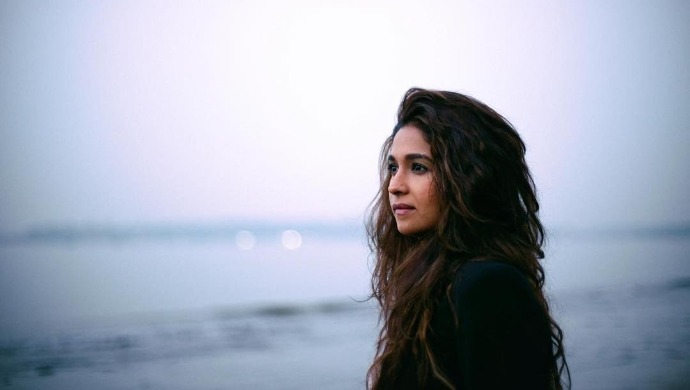 I shake hands with Harleen Sethi before beginning the interview and tell her that I’m a big fan of her dancing. She smiles humbly and quips, “Thank you, but I hope one day you tell me the same about my acting too.” Dressed in a crisp white shirt, a red skirt and a black choker, the actress looks radiant and is pumped up to begin the chat. After impressing audiences as Sameera in Broken But Beautiful, the actress is back with the second season of the ZEE5 original Hindi series.

The series sheds light on relationships and heartbreaks. It’s a known fact that aside from their work, celebrities are also in the news, even more so, for their personal life. Harleen too experienced the same with her former relationship with Bollywood actor Vicky Kaushal. During our chat, the actress said, “As an actor, I’d like to say that we would love to be spoken more about our work and less about personal life.” Read our exclusive interview with the actress where she opens up like never before on her journey of highs and lows, so far.

1. Was there pressure to live up to the popularity of the first season of Broken?

To be honest, yes. I was having sleepless nights even while shooting for it because, by god’s grace, people could relate to the show and it became very big. Even on Instagram, if I would share anything on Broken, there would be so many messages that I would receive. People have really opened up to me and Vikrant and shared their stories on how they were heartbroken and how they healed, like Sameera.

2. You wrote “Linkups don’t build me. Breakups don’t break me,” in one of your Instagram posts. What is a make or break for Harleen in real life?

A strong support system is what really makes you; when you surround yourself with the right kind of people- who inspire you, who have the right kind of values, and who really pull you up in your bad time. What breaks you is when you give up on yourself. Nothing else can break you, you are responsible for your own self.

3. Did you borrow from your personal life experiences to bring your character of Sameera alive?

Yes I did. I had to, because the USP of this show is that it’s so relatable, real and raw. I had to go to those dark spaces where once upon a time, I was broken to do as much justice to Sameera as possible.

4. Do you think the web medium has helped bridge the gap between stardom and A-listers? Is the digital space helping actors get their due credit?

Yes. The web series’ platform doesn’t see what kind of background you come from, whether you are from films, TV or whether you’re just a YouTuber. It just puts everyone on the same platform. At the end it’s about your talent. Your work talks for you. It’s no longer about which family or clan you belong to.

5. You are yet to make your film debut. However, there must have been offers we assume. Have there been?

I have had offers. But for it’s very important for a film to have a good director and good content. Everything has to come together because I always have been very picky and choosy about the kind of work I do. Hopefully, you will see something really soon.

6. Vikrant Massey is a critically acclaimed star. Share your experience of working with him.

I was very excited when I got to know that Vikrant is going to be opposite me because it’s fascinating to always keep learning. Every actor has a different process and method. It was intriguing for me to see that he’s an actor who acts so realistically and is so true to the moment. He’s a very humble guy so he doesn’t make you feel like he comes with almost 15 years of experience while you are just starting out. He’ll in fact go a step ahead and help you. We’ve always shared a great rapport and enjoyed working on several improvisations. Thankfully our directors were always open to us experimenting with our shots.

7. Have you ever been like Sameera at any point in your life? How have you dealt with breakups?

Funnily enough, after my last breakup itself, I was told ‘why are you behaving like Sameera? It made me reflect and realise that I am behaving like her. I realized that I cannot give up like that and put my core into somebody else’s. I have to love myself first. So Sameera as a character shows you that vulnerable side, but also shows you how to heal, which is the beauty of it.

8. Actors often keep their personal life to themselves as they believe that it takes away from their work. Would you say that has happened with you?

9. Are you open to the idea of dating your co-star or industry colleagues?

I would like to say that there are no set rules, because I would like for everything to happen organically. It has to feel right from within, because if you’re faking it, it’s not going to last and then you don’t want to make yourself or the other person go through that hurt. So it’s not about the profession. I think any two people can make their relationship work if they are honest with one another.

10. Emma Watson recently spoke about being self-partnered. How aligned or not are you with the idea of being whole on your own?

That is a very spiritual thought I would like to say. I have been trying to work towards that, I think we all do. They say that even when you are in a relationship, it’s not about the other person coming and completing you. You are complete, and so is your partner. And then you come together and that’s a happy environment. Because if there’s something lacking in you and if the other person is trying to fulfill that, it becomes a very needy relationship.

11. One relationship advice you’d like to give to your fans.

Be complete in yourself. Don’t look for things that you don’t have and desire in your partner as that’s not a healthy relationship.

12. And lastly, what are the qualities you desire in your partner?

I’m a sucker for simplicity, honesty and kindness. If I like the person’s soul, that is very attractive to me. I’m not very materialistic. It’s more about how the person is.

Tell us what you think of Harleen’s viewpoints in the comments section below. For more entertainment, check out the collection of all ZEE5 Hindi originals here.

(With inputs from Aayushi Sharma)

26/11 Attack: Eleven Years Of 2008 Mumbai Terror Attacks, One Of The Deadliest In History