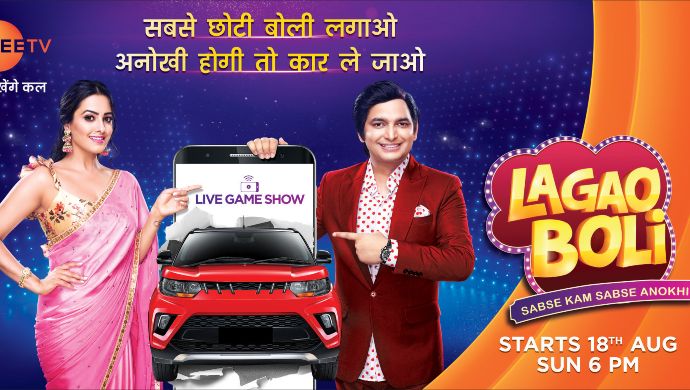 After treating viewers to Dance India Dance, Sa Re Ga Ma Pa, India’s Best Dramebaaz and other popular shows, Zee TV is set to bring a game show for its fans. Lagao Boli, a Raj Kundra’s production, will be a LIVE game show that will be aired on Zee TV. One of the leading television actresses, Anita Hassanandani, has been roped in to host the exciting show alongside Paritosh Tripathi and Dheeraj Juneja. Lagao Boli, as the name suggests, will be based on the bidding system and shall air on the channel from 18 August 2019 onwards, every Sunday at 9 pm.

The concept of the game show is pretty interesting. Bid the lowest and win the most! Yes, the audience will have to make the bid live and the one who bids the lowest wins. Viewers can bid for multiple prizes every week on an online platform, live during the show. The winners too shall be picked live, so everything will be out there for the viewers to see. A total of 3 winners will be chosen and 3 prizes will be given away! In case you are still not kicked, the prizes shall range from mobiles, iPad, laptops to two-wheelers and car.

Besides, Anita shall play a host of celebrity judges every week on the show. Producer Raj can be expected to make a grand appearance with his gorgeous wife and stunning actress Shilpa Shetty Kundra. Moreover, actors like Sushant Singh Rajput, Shraddha Kapoor, Rajkummar Rao, Ayushmann Khurrana, and others might grace the show as a part of their film’s promotions too.

So what are you waiting for? Lagao Boli – Sabse Kam Sabse Anokhi! Are you excited to participate and take home bumper prizes? Tell us in the comments section below. Stay tuned for more updates about Lagao Boli.

Till then, enjoy all episodes of Ishq Subhan Allah only on ZEE5.

Birthday Spl: 10 Things About Actress Taapsee Pannu Every Fan Ought To Know

EXCLUSIVE! Anisha Victor: I Was The New Kid In School Every 2-3 Years, I Was Bullied A Lot