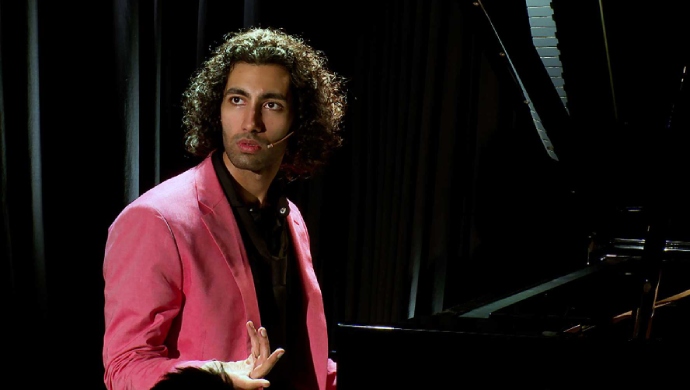 ZEE5’s first foray into stand-up comedy, Comedy Shots, features a good variety of stand-up comedians. Aadar Malik is one such comedian who brings variety to the line-up. He is the cousin of Armaan and Amaal Malik, and has a unique blend of stand-up through music. This has become his calling card over the last few years. He was part of the popular comedy collective, SNG, which recently broke up. He spoke to us about his journey in Stand-up comedy and his work on Comedy Shots.

Q: As an open micer myself, it is always interesting to know how some of the bigger guys got into comedy. When did you decide to give Stand-up comedy a shot?

A: I was doing a play which I wrote myself, in which I played a stand-up comedian. The play didn’t run for long so I had a lot of material left after the play was done. That’s when I decided to take the material on stage…

Q: So when you did the material at your first open mic, did it work? What was that experience like?

A: The jokes didn’t work at my first open mic. They made people laugh when I was doing the play but the first time I used it in actual stand-up comedy it didn’t work. But I feel for comedians the first open mic usually doesn’t go well but you just keep at it.

Q: So when did you decide to include music as part of your comedy?

A: Varun Thakur. He convinced me to use the songs as part of my live performance. Till then I was just writing songs which I thought were funny and I used to think I will make them for SNG. Varun convinced me to perform the songs on stage and it really worked well for me.

Q: When did you realize that music was the strong suit in your comedy?

A: Almost immediately. I went from doing 10-15 minute performances to 45 minute shows. I would just show up with my guitar and perform these songs I used the guitar to perform the songs I had and I started getting bigger shows in a month.

Q: Did you ever refuse to drop a song because it’s a good song even if it is not that funny?

A: Not really. If the song doesn’t work at first then I re-work it till I am sure it is funny. For my song ‘Straight Gay or Bi’, I wrote almost 8 drafts and almost dropped it before I found one that really worked for the song.

Q: You perform in both Hindi and English. Do you have a preferred language to perform in?

A: The language doesn’t matter mostly. I go with whichever language makes the joke sound funnier. Plus performing all over India you slowly start doing more of your comedy in Hindi. Even for ZEE5’s Comedy Shots all the songs I have performed are in Hindi.

Q: Was it a conscious decision to avoid being associated with Anu Malik and coming from a Bollywood family? Your video talking about your Bollywood family was out only in 2019.

A: No No. I was already talking about it since 2017. But then Karan Talwar took over the YouTube channel for SNG Comedy so I had to upload it later. So no I have not hesitated from talking about my family background.

Q: About the SNG break-up. While Sorabh Pant and Atul Khatri left EIC the decision didn’t seem problematic. However that was not the case with SNG.

A: When EIC split, it was a mature decision made by adults. With SNG it was a childish decision made, based on one man’s ego, Karan Talwar. I guess he didn’t like that the channel was associated more with us than his name.

Q: So how is life after SNG. Do you still work with the other members.

A: Life is good because there’s less responsibilities. Neville (Shah), Kautuk (Srivastav) and I are working on something which we will be shooting for soon. Varun and I keep discussing about creating things which we can also act in because we both love acting. So we still work with each other mostly.

Q: So is there a chance you all might form another comedy group of your own.

A: No we won’t form a group. We will only collaborate on each other’s projects. Neville is getting ready to shoot his next special. I’m writing the end credit song for him. It’s not even a comedy song.

Q: When you were working on Comedy Shots did you come up with new material for the show? Or did you dig in to find some older song you hadn’t used.

A: These are all new songs and all of them are centered around one theme, summer. All the songs are around nostalgia about summer and how I laze around during summers. Stuff like that.

Q: Did you get to test these songs before shooting them?

A: Yes. I would sneak one-one song into my performances to test if they work. Plus before going on stage with a song I rehearse it 50 to 60 times at home itself.

Q: (Realising that I have a long way to go to be successful, after hearing this) Would you recommend this to all aspiring stand-up comedians? What is your view on the stand-up scene in India currently?

A: I feel like the stand-up scene is still growing. You can count the number of comedians we have that’s one sign that it is not that big yet. But one thing I would tell all comedians is to perform and respect the audience’s time. If 2-3 people show up do your best instead of getting upset that only 3 people showed up.

Q: Out of the co-performers on Comedy Shots, do you a particular comedian who’s performance you are excited to watch?

Stay tuned for Aadar Malik’s performance on Comedy Shots, where he even has a song about gully cricket to compliment the world cup season. Watch the latest episodes of Comedy Shots to get a short break and lift up your day.