Exclusive! Comedy Shots’ Gaurav Kapoor: I Don’t Want To Give Any Message From My Comedy

Gaurav Kapoor stars in the latest episode of ZEE5's Comedy Shots where he jokes about Marathons, Anil Ambani and Milind Soman. 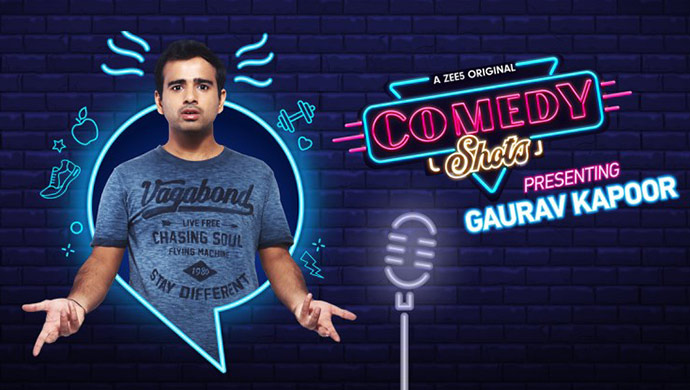 Gaurav Kapoor’s episode for Comedy Shots, released today On ZEE5. In that he rants about marathons and his dislike for people who run marathons, including himself. He does stand-up comedy in Hindi and has his own one-hour comedy show ‘Ha Ha Kaar’ on a popular streaming service. In this own words, with ‘Comedy Shots’ he wants to reach people who like watching his comedy but can’t stand him for an hour.

Before starting the interview Gaurav Kapoor jokingly suggests that I write the interview myself without asking any questions. He comes across as someone who dislikes talking about himself much unless it’s on stage. He agrees to continue when I promise the interview will be short.

A: The first time I performed it went well for me… Oh no wait, my first open mic was really bad. My jokes turned out to be similar to another comedian’s who performed on the same day. The audience felt like I was repeating his jokes. So then I wrote new jokes and went back to perform the next time.

Q: When I spoke to Rahul Dua, he mentioned an advice you shared with him about being funny for an hour first before thinking if a joke is socially relevant, relatable and all. Would you still feel the same way?

A: Yes I tell that to people today too. A lot of comedians coming up want to do jokes about social issues and political commentary, but they first need to become funny. I myself only go for funny jokes and don’t think about anything else. I don’t want to give any message through my comedy.

Q: You were the opening act for Russell Brand and Vir Das quite early in your career? How did that feel?

A: It happened so long ago. I had barely started out a month before and I didn’t know who Russel Brand was and I didn’t know how big they both were. It was only after I performed for them that I found out about them. I got to open for them because I had won an open mic and after those performances I was back to doing open mics again.

Q: So who did you watch that inspired your to do comedy?

A: I wasn’t inspired by anyone. I do jokes because I like to be funny. I didn’t get inspired by seeing someone else. However, I do have favourite comedians I like to watch Gaurav Gupta, Prashasti Singh and even Vipul Goyal.

Q: Your earlier show ‘HaHaKaar’ is out and well-received by audiences. Your next one hour show is titled ‘Sab Scam Hai’. What did you try and do differently from the previous show?

Q: For Comedy Shots, did you use new jokes or did your pick up some older bit?

A: I already had a few jokes about marathons and the show had to be topical. So I added a lot of new jokes to it. I sat down with another comedian Vinay Sharma and together we added more punchlines to it. I worked on it at open mics before shooting for it.

Q: From the other performers on Comedy Shots do you have any performer you are excited to watch?

A: I am excited to watch Pratyush’s performance. This is mainly because I find him funny but also because his style of delivering jokes is so different from mine.

With the interview more or less done, the conversation drifts to other topics where Gaurav mentions that he doesn’t follow Cricket or celebrate Father’s Day. He was watching another show when he found out India already won against Australia in this year’s ICC world cup 2019. He also feels Father’s Day is more of a Mumbai thing and not that popular in Delhi.

Watch Gaurav Kapoor’s make a few jokes about the opening and end credit music of Comedy Shots, streaming on ZEE5.