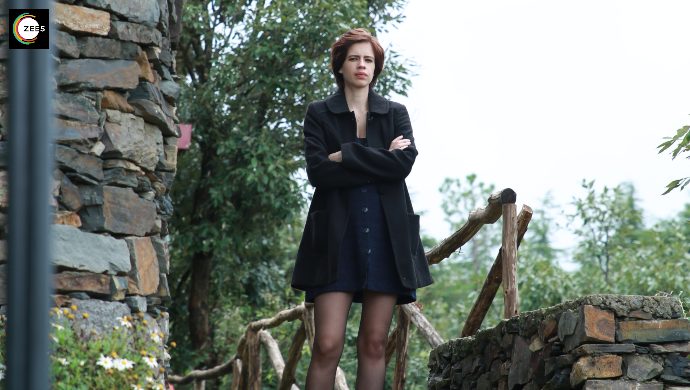 Kalki Koechlin started the year on a high-note with Gully Boy, went on to do two remarkable web series and is set to end it with a bang with ZEE5 Original Bhram. The eight-part web series stars the actress as a novelist Alisha Khanna, who suffers from posttraumatic stress disorder (PTSD). Before she started shooting, Kalki found out she is pregnant with her first child and is due in December 2019. In an exclusive interview, she talks about how she juggled pregnancy and playing a character with PTSD, paranormal experiences in real life and more. Read the excerpts below:

Q. Bhram seems like a one-of-a-kind psychological thriller. Is that what attracted you to it?

What attracted me was the fact that you can’t tell till the end of the story whether this is happening in someone’s head or whether there is really paranormal activity. It can be explained both ways, right. The truth and what you see depends on your perspective. If you believe in ghosts you’ll think it’s a ghost. If you don’t, you will have a scientific explanation. That is the interesting part of it.

Q. Speaking of ghosts, have you had any paranormal experience in real life?

I have heard a lot. I used to stay in the mountains when I was growing up in Ooty. There were so many folklore. I have heard. Main fattu hoon, main horror film bhi nahi dekh sakti. But I haven’t experienced anything personally. I do believe there is an energy, a weird feeling but have seen nothing in person.

Q. How did you manage to keep your mind relaxed and play such an intense character during pregnancy?

I got a narration from Sangeeth Sir in June and we had to start shooting in July. I had literally just found out that I am pregnant. I was thinking about whether I should tell him and not. I called him the next day because I had liked the script so much. I told him that I am pregnant and this is my situation, can we still do it? We had to figure out a little bit, especially the action scenes. During the more recent shoot, we had a body double to do the running scenes.

Thankfully, I was in Shimla. There were birds instead of horns, clean air instead of pollution. The surroundings helped a lot. During the shoot, I’d be in a very Alisha Khanna, stressed and hallucinating kind of zone. As soon as the day would get over, I’d do yoga to get rid of all that energy and play my ukelele. I started playing this year. So yeah, just shifting the energy.

Rangbaaz 2: Did You Know Jimmy Shergill And Gul Panag Have a Strange…

Q. You have earlier said you are not good with spontaneity. What was the prep for Bhram like?

I am not good with spontaneity just because of the language barrier. If I am working in English, I am okay with spontaneity. If I am working in Hindi, I get small little things wrong. So I like to prepare my lines in advance. The prep for Bhram was actually sitting with Sangeeth Sir on the script and deciding where is she hallucinating, where is she actually seeing things, where is she having a memory jolt…all these things we had to really specify. Because it’s over eight episodes, there are a lot of past, present, and future so I really had to know where I am in the story. We didn’t do any workshops because we had no time.