While shooting for Kareena Kapoor Khan's show Dance India Dance 7, the former cricketer presented the actress with an autographed bat for her son. 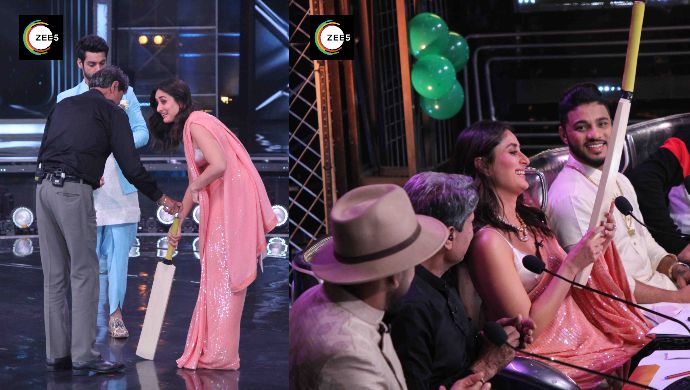 Taimur Ali Khan is hands down the most popular star-kid about tinsel town. Kareena Kapoor Khan and Saif Ali Khan‘s two-year-old boy is a headline maker and an internet breaker. The literally blue-eyed munchkin is already a superstar, and his super cute looks make it impossible for anyone to not fall in love with the little one. Taimur, who often hogs the limelight from industry bigwigs, recently received a special gift from former Indian cricketer Kapil Dev. The Haryana Hurricane presented Kareena with an autographed cricket bat on her Zee TV dance-based reality show Dance India Dance 7.

Kapil shot for the ‘Happy Birthday India’ – Independence Day special episodes of Dance India Dance off late and it was on the sets of DID he gave Kareena a bat for Tim. Along with his autograph, he wrote an adorable message for the toddler – “Taimur, good luck. Hope you play for India one day.” As Bebo received the token, she couldn’t help but smile and thank Kapil graciously for his sweet gesture. That’s not all, she even played cricket with him and the sportsman handed out tips to her about the game, too. Check out exclusive pictures of Kapil gifting Kareena and playing cricket with her on DID 7 here:

Taimur’s grandfather, late Mansoor Ali Khan Pataudi, was an Indian cricketer and former captain of the Indian cricket team. Nicknamed as Tiger Pataudi, he was called as one of ‘India’s greatest cricket captains’ and the ‘best fielder in the world’ during his time. Tim’s great grandfather Iftikhar Ali Khan too was a renowned cricketer while his grandmother Sharmila Tagore is one of the ex-cinequeens. Kareena, herself, comes from the first family of Bollywood while Saif and Soha Ali Khan‘s acting stints are phenomenal too. Needless to mention, Taimur has the best of both cricket and cinema genes. Although he is too young at the moment, we cannot to see him play with his present from the cricketing legend.

Get in the mood of patriotism and catch Independence Day movies, here.