Exclusive! Kark Rogue Actor Rajesh Sharma: We Shot Every Scene Both In Hindi And Bangla 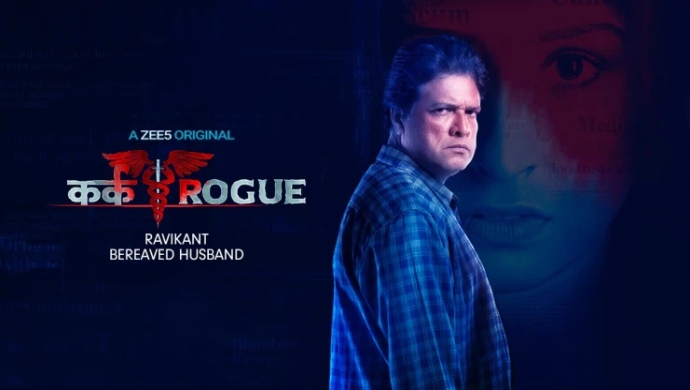 Rajesh Sharma will soon be seen as Ravikant in the show Kark Rogue, A ZEE5 Original series. The unique part about this series aside from the story itself is that the film has been shot in Hindi as well as Bangla. Rajesh Sharma is an experienced actor in Hindi movies. His work in movies like Dream Girl, Jhootha Kahin Ka and Tanu Weds Manu Returns won him acclaim and made him a recognised face among the masses. We sat down with him to chat about his experience working in a web series for the first time.

1. What does it feel like making your digital debut with ZEE5?

This is my debut in a web series and it happened in a very interesting way. I started my career with the producer of the show Pritam Choudhury. I stay in Kolkata, still do, and we started our careers there. He started as a production designer and me as an actor. We both know we wanted to do something, maybe not become famous, but do some good work. Today he is producing the show and when he approached me for it I was all set to work with him.

2. Is that what made you take up the role on this show?

The subject of the show is also very interesting. Karkat Rog is cancer and it kills a person from inside. Similarly, corruption is like cancer which kills the society from inside. The show touches on corruption in the medical world. We believe doctors save lives but when they turn corrupt, the whole system collapses, and that is what we depict in this show. There are not many shows that touch upon this topic.

3. What is your character like on the show Kark Rogue?

I play a man called Ravikant. His wife is a doctor but he is a scamster. While his personality may sound like a villain, he is not one. In fact, his wife dies and he finds her death suspicious. He takes it on himself to find out the truth.

4. So the series is a medical thriller. Did you have to do any specific training for the medical aspect?

I didn’t have so much to do with the medical aspect because I’m playing a common man in the show. I didn’t have to learn anything as such but there was a doctor on set who would tell me if I was pronouncing any of the medical terms wrong and what is the right word.

5. The show has quite a dark vibe to it. Was that the mood on sets as well?

Yes, that credit goes to the DoP because he gave it a different look. Corruption is not black and white, but it is more of a grey area. I think the cameraman has achieved that kind of tone perfectly. Because on the set we were very jovial. Everyone would laugh and talk to each other and we were serious only during the shots.

6. You’ve worked in Bangla and Hindi. Which language are you more comfortable with?

I’m a Punjabi by birth, but I learnt Hindi. So I am most comfortable with Hindi. I’ve been living in Kolkata for many years now. So Bengali is like my third language and I’m quite good at it.

7. Kark Rogue is releasing in both Hindi and Bangla which is very unique for a web series. How excited are you about that?

8. Give us 5 reasons why the audience should definitely watch Kark Rogue (or Karkat Rougue in Bangla)?

Firstly, Karkat Rogue is a medical thriller which is a story rarely told. Secondly, the script is tight and the show is fast-paced. The audience won’t feel bored for a second. Thirdly, it is a bilingual series which I think is the first time in Indian series where both languages have the same lead cast. The fourth reason is that it’s a Zee show, which has always been at the top of entertainment. Lastly, the show has Rajesh Sharma.

Watch him in the upcoming show #Kark Rogue, it premieres on 10th January only on #ZEE5.

Throwback To Lohri Celebrations On Kumkum Bhagya And Kundali Bhagya With AbhiGya, PreeRan