Exclusive! Masi Wali On Playing A Double Role In REJCTX 2: It Was A Great Challenge

Masi Wali talks about how he prepared for role of Aarav and Jackie in REJCTX 2, and reveals his uncanny connection with his on-screen personality. 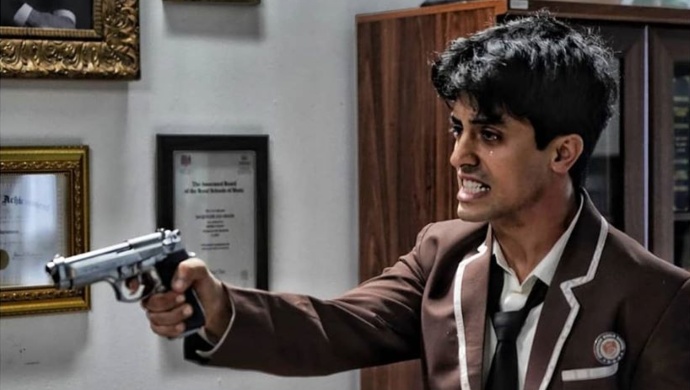 Masi Wali gained popularity with his role as Aarav in the ZEE5 Original Series REJCTX. The first season of the show ended on a cliffhanger, where he is shown shooting a bullet, but we don’t find out who he ended up killing. In the first season people found Masi Wali to be a lookalike of Joey from F.R.I.E.N.D.S, and in the second season Aarav has a doppelganger in the show too. He talks to us about playing a double role so early in his career and his friendships on the sets of REJCTX.

Watch a trailer for REJCTX 2 here.

1. How excited are you for the new season? What new can the fans expect?

I am really excited for the new season because in the first season the first few episodes were only explaining their characters. This season I think people are already familiar with the characters and know their problems. This season the viewers will get an even more personal look at the characters. Plus with the new entries to the cast with Esha Gupta, and Tanvi Shinde things have become hotter definitely, but also a lot more interesting as a story. The story is fast paced and you will watch 4 episodes but feel like it’s been only two episodes.

For my character, Aarav, it was left at a very interesting note. I’m sure audiences are waiting to know what is happening with my character since the end of last season. They don’t know if Aarav has killed someone. If he has, how will it affect him? I am also playing a double role as Jackie. He is the polar opposite of Aarav but he is also inspired from real life stories and people I’ve come across.

2. How different did it feel returning to the set, as compared to the first time?

I returned to the sets more confidently, and I think for season one, I gave two months of my life whole-heartedly. In that season, there was pressure, the bonding with the co-stars improved, and even developed a good equation with Goldie. This time it was a lot easier in many ways, but also a lot tougher. The shoot schedule was almost half this time. Last time we shot for 60 days, this time it was for 35 days, and even that reduced because of the coronavirus lockdown. We were shooting for almost 12-14 hours every day, and this is not counting the dance rehearsals, workshops and other stuff.

Also there’s a greater expectation from the audiences, so you have to outdo yourself. Most actors take on a double role much later on in their career. There’s so much technicality in playing a double role especially in the same frame. So that was a great challenge I loved.

3. How did you go about preparing for the role of a Jackie?

A lot of the credit for the preparation goes to Goldie. He told me about the character, gave me the backstory, helped me understand the mindset of Jackie. Once you understand someone’s mindset, you understand them completely. After that, I went about finding references of people in my life who were like that and that kind of formed the character.

4. Do you feel shows like REJCTX become more important because of incidents like ‘Boys locker room’, where people no longer understand what the younger generation is up to?

I think teenage years are a lot of pressure. Your parents want you to be a certain way, you don’t know what decisions to make but you are expected to make them without failing. So in that journey it becomes hard to make sense of everything. REJCTX shows the lives of teenagers, who have issues with their sexuality or gender, some come from broken homes where they see domestic abuse. They are still figuring out what is right or wrong.

5. Do you feel officer Rene (Esha Gupta), is a response to people who felt REJCTX showed the lives of privileged kids?

See things were getting out of hand with Aarav. He might have been right, in his anger in the beginning of the season. However, towards the end he brings the gun to school, points it at a friend, fires it at someone. At another point, he even physically abuses one of the teachers. So he was going down a wrong path. So officer Rene is there because he committed a crime, not because he is privileged and she hates it. That’s just part of her story.

6. Since the show is all about music. Which is your favourite song from season 1 and season 2?

From the first season it is obvious Theek Hai Na, because I think it has the best lyrics. In this season my favourite songs are Ranjhana, and Sun Lo Na. Ranjhana has everything from folk to contemporary, to electronic. There’s Sun Lo Na, which is the classic Bollywood romantic song.

7. You mentioned that all the characters are played by people who are kind of similar? What are three qualities you have in common with Aarav?

So Aarav is a momma’s boy, and I am very close with my mother. Aarav also has a strained relationship with his dad, I lived away from my father for almost 13 years. Since 2001, I think I’ve only spent maybe two or three years with him in total. When we were living in Canada, my dad was in another country, and when he went to Canada, I moved to Mumbai. So I never got to be really close to my dad, and Aarav had the same distance. Now I’m really good friends with my dad, but for a long time I couldn’t connect with him on a personal level.

8. With which co-star on set is your equation more or less like what we see in the series?

I would say, Harry And Maddy, because we bring our natural quirkiness on the screen, when we are together. I don’t think we need to rehearse anymore.

9. Since this season is hotter and more exciting. Can you tell us three of your hottest co-stars in REJCTX?

Now you will get me in trouble. How can I name three people when everyone is hot ? I think everyone is hot on the show, but if I had to pick I’d say Jackie (Masi Wali), Maddy (Ayush Khurana) and Harry (Prabhneet Singh)… and the rest are super hot.

Find out more about his character and his double role in REJCTX 2 releasing on May 14, 2020 only on ZEE5.

Baarish 2: 5 Things Every Couple Will Relate With Anuj-Gauravi's Marriage