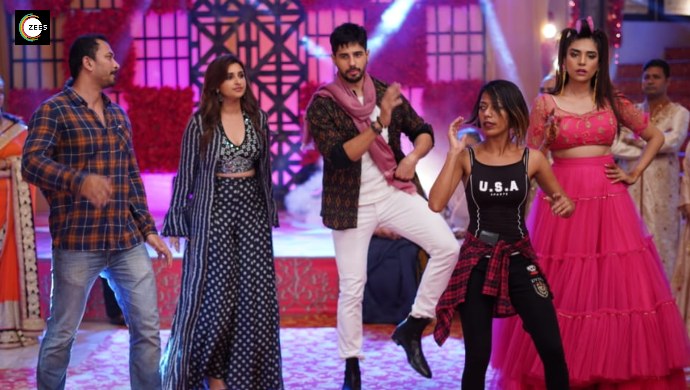 We earlier informed you that Jabariya Jodi stars Sidharth Malhotra and Parineeti Chopra are all set to make an appearance on Zee TV show Kundali Bhagya. Notably, the Bollywood film and the television series are both bankrolled by Ekta Kapoor. In the latest episodes, we see that Srishti tries to trigger Karan by sharing Preeta’s pictures in a bridal avatar with him. Karan, on the other hand, gets more upset over Mahesh Luthra’s condition and loses his cool on his father’s doctor. Prithvi, meanwhile, is torn between marrying Preeta and fulfilling Sherlyn’s demand.

All the drama is set to take a backseat for a while as Sidharth and Parineeti shall perform a special act at #PreetaKiShaadi. As confirmed earlier, both Sid and Pari shall be seen dancing to Khadke Glassy, with Anjum Fakih aka Srishti. We now have exclusive pictures from the wedding sequence’s shoot for you, check them out:

In Jabariya Jodi, Sid plays a thug who abducts grooms and gets them forcefully married. The movie reflects on the prevalent practice of pakadwa vivah in Bihar. Going by the theme, our best guess is that Abhay and Babli (Parineeti) shall bring a major twist in Preeta – Prithvi’s wedding. Our sources exclusively told us that Karan shall kidnap Preeta to take revenge, and will leave no stone unturned to ruin Prithvi’s happy ending. What measures will Sherlyn take to stop Prithvi’s marriage with Preeta? Rest assured, a high-voltage drama is in store for the viewers!

Guess we can only wait till the track is aired to find out who finally Preeta marries. Watch Kundali Bhagya this Wednesday only on ZEE5 to find out.

Watch ‘Bhoot Purva’ a ZEE5 Original horror comedy. This web series stars Zoa Morani and Rishabh Chaddha, where one partner returns to be with the woman he loves.