Ragini Khanna plays the a serial killer on ZEE5's latest psychological thriller, Posham Pa, talks about the good and bad of her experience and more. 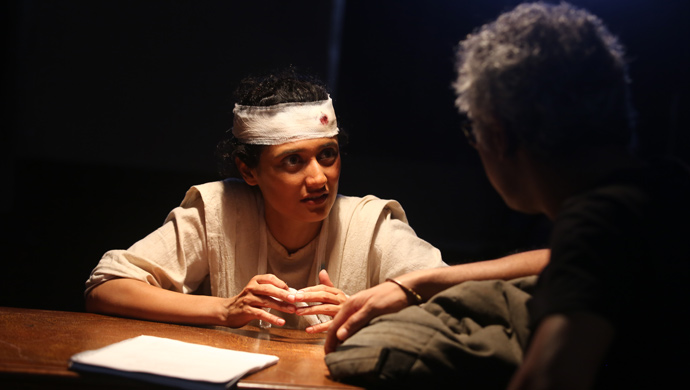 Ragini Khanna is established name in TV industry. She has not only acted in popular TV shows like Sasural Genda Phool, but also been the host of a reality show ‘India’s Best Dramebaaz‘. She comes from a family of entertainers, being Govinda‘s niece and yet managed to create her own space in the industry. She is aware of her desi and bubbly charm, but loves that she gets to play dark characters on screen. In Posham Pa, releasing tomorrow, she plays the role of serial killer alongside Mahie Gill and Sayani Gupta.

We meet Ragini at a restaurant over lunch to discuss her latest pycho-thriller ‘Posham Pa’ over some Chinese food. The conversation begins on a lighter note.

Int: ‘Posham Pa’ the name is derived from a childhood game and given a dark twist. Did you play the game as a child or did you play any other such games?

Ragini: We played a different version of Posham Pa, it was called ‘Oranges and Lemons’. Also there were games like Bang bang, Lagori, Sakhli. I used to play the old video games like Mario, Sonic the hedgehog. I was an active kid too and I played badminton and carrom.

Int: The film ‘Posham Pa’ if quite different from your usual filmography. So what made you pick up this film?

Ragini: The script and the director undoubtedly. And the fact that I got to play a character that was anti-law.

Int: Did that attract you to the character, the criminal aspect of it?

Ragini: I got an opportunity to play the role of a person who was against the law. This is something I would never dare to be in my personal life. So it challenged me exceptionally as an artist and I got best guidance from from Sonam the director.

Int: From the trailer itself, the movie seems very dark and intense with killings and jail scenes…

Ragini: Yes the jail scenes were quite dark because shot in actual prisons where people were jailed.

Int: So how did you prepare to get into the character?

Ragini: A lot of emotional prep for me because I had to disassociate Ragini from Shika. As Ragini, I am very emotional. I had to raise my empathy to a great level. Because I felt I had to justify a criminal in my mind to play the role. So I had to break down barriers in my mind of what was right and wrong. It was an excruciating process. I’ve also broken down on sets, many times.

Int: Did you break down because of the character’s crimes or for their victims?

Ragini: No. I would get upset thinking about the street kids. I would feel sad thinking about how tough their lives are and how we are not doing anything for them. I am not a street kid and have never been one, I had to make my skin 6 shades darker with make-up to get the look. I would question the judiciary and why there is such a disparity. The child in me would wonder why things must be so dark.

Ragini: No no, I have completely let go of her and happily waved goodbye. Never want it back although there may be traces her. I made conscious efforts like watching movies, talking to people going to restaurants, working out. All of these helped me get back to my actual self. The fierceness of Shikha is subdued. In fact I channeled all my negativity and angst through Shikha which is one thing I am glad about.

Int: You star alongside Mahie Gill and Sayani Gupta. How does it feel being a part of an all-female leading cast?

Ragini: It’s not my first. Television is ruled by women and I have played big roles on TV shows. So I’ve come from a strong emancipated background for women I’m pretty much used to it.

Int: You also have a strong singing background and recently put out an acoustic cover on one of Govinda’s songs…

Ragini: I just recently returned to singing and that song was just a trial and error song. But I’ve been singing since I was 13. I have sung for Televions title songs, Ad jingles. I was a part of a chorus and have done live shows with my mother too. Then I became popular as an actor and singing took a backseat. So yeah if anything comes my way I would love to get back to singing.

Int: Last year, you had mentioned you did a lot of free work for creative satisfaction. Does that trend still continue?

Ragini: Free work? (laughs) No, No. I haven’t been doing free work. See I’ve done a lot of TV shows and on TV shows the female lead is the be all and end all. So obviously I’m used to being the highest paid star on the set. But when it comes to films I don’t want my cost to throw a film’s budget off-balance. If I really want to do a film I will happily take a cut to justify my cost to the film because acting is my soul.

Int: So what kind of roles do you see yourself doing?

Ragini: I’m quite surprised by the kind of roles I get. I’m usually this happy cheerful person but the roles, first Gurgaon and now Posham Pa are dark and gritty. But I don’t think I’ll ever do anything as dark as Posham Pa. Like I’m not challenging anyone  to make something darker, but I’ve lived all my negativity through Shikha on Posham Pa.

Ragini: Firstly, It is an extremely courageous film taking on toxic femininity at an extreme. Secondly, It touches on topic of nature versus nurture and how you cannot escape from yourself. Thirdly, the national award-winning director Sonam Mukhopadhyay. The years of hard work he has put in to bring out this story with nuance is impressive.

Int: Lastly, which is the latest film/ show have you watched on ZEE5?

Ragini: I’ve seen Barot House which was very well made.

Int: That’s also in the similar space of psychological thriller…

Ragini: Not at all. Posham Pa is far darker with 3 criminals. You have to see Posham Pa to know how dark it really is.

As I leave, Ragini asks for more ice-cream to go with her fried sweet noodles. Then realising she asked to loudly she she chuckles and asks a waiter more politely. Watch this loud and cheery person turn into a silent and serious psychopath on Posham Pa.

With inputs from Ayushi Sharma