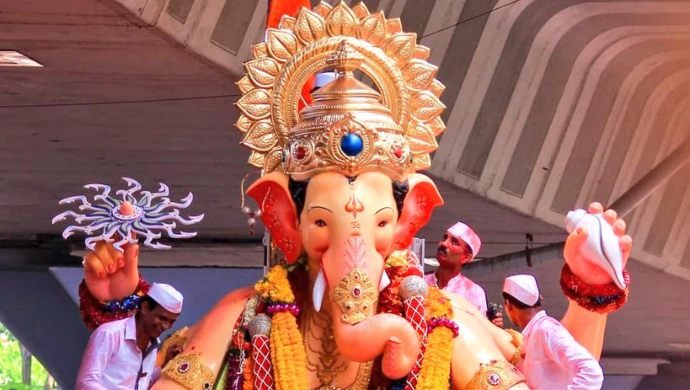 Ganesh Chaturthi 2019 | Ganesh Chaturthi marks the birth of Lord Ganesha. The festival is celebrated to commemorate the arrival of the elephant-headed Hindu God. Ganeshtosav is celebrated from the fourth day of the waxing moon period i.e. Shukla Chaturthi to the 14th day called Anant Chaturdasi, in the Bhadrapada month of Hindu calendar. People install idols of the deity in their homes and public places (pandals) and worship him for 11 days to bring good fortune and remove all the obstacles.

Madhyahna Ganesha Puja Muhurat – 11:05 AM to 01:36 PM – it is believed that Ganesha was born during mid-day and thus, a Madhyahna puja is performed.

The festival of Ganesh Chaturthi originated in Pune, Maharashtra. The idol of Lord Ganesha at Siddhivinayak in Mumbai and another one at Dagdusheth Halwai Ganpati temple in Pune’s Budhwar Peth are quite popular and historical. Pune and Mumbai are one of the best places to experience the Ganesh festival. In Mumbai alone, lakhs of devotees flock pandals to offer their prayers while 10,000 statues are displayed across the city. However, besides Maharashtra, several states, too, celebrate Ganeshotsav including Goa, Tamil Nadu, Telangana, Karnataka, and Andhra Pradesh.

How is Ganesh Chaturthi celebrated?

Magnificient and huge statues of Lord Ganesha are welcomed in homes and pandals, beautifully decorated for the occasion. Months before Ganeshotsav, artists begin making the idols and bookings take place in advance. Legend has it that one shouldn’t look at the moon on the first night of the festival as it is said the Moon Lord had laughed at Lord Ganesha when he fell from his vehicle, the rat. Another legend goes that one is likely to get accused of thefts if they see the moon.

Once the statue of Lord Ganesh is welcomed, a ceremony called Pranapratishhtha Puja takes place to invoke the power of Ganesha into the idol with the chanting of mantras. Sweets, flowers, coconut, jaggery, rice, etc are offered to the Almighty. Special prayers and events are organized every day as devotees worship the idol in the morning and evening with a puja. Lord Ganesha is treated as the guest of honour by those who install his idols during Ganesh Chaturthi in their homes.

On the last day i.e. Anant Chaturdasi, idols are paraded through the streets as devotees dance and sing along with pomp and show, eventually immersing the idols in water bodies.

Why do we do Ganesh Visarjan on the last day of Ganeshotsav?

Even after the form goes away once the idol is immersed in water, the power of the deity remains intact. Change is only constant in the universe, but energy lasts. This ritual is a reminder of this very belief!

This year, Janmashtami 2019 will be celebrated on 24 August 2019. If you would like to know more about Lord Krishnam, take a look at our Krishna Janmashtami Special movie collection.