We take a look at how Guddan vs Antara is Indian TV's Batman Vs Joker and why Guddan has a better success rate than Batman. 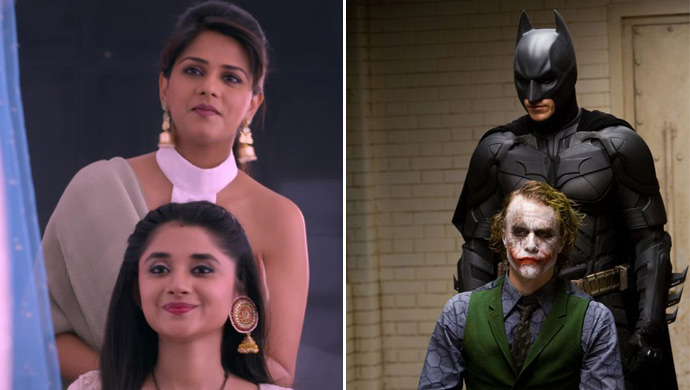 For anyone who has been watching Guddan Tumse Na Ho Payega, the story will seem familiar. Antara gives Guddan an option to either save AJ or Angad. She tells Guddan that she won’t have time to save both of them. Guddan is forced to choose between AJ, whom she loves, and Angad, who is like a brother to her. This twist is almost identical to the plot twist in the ‘The Dark Knight’, where The Joker tells Batman he can save Rachel, whom he loves, or Harvey Dent, who is like a brother to him.

But the similarities don’t end there. There had been ample proof to show us that Antara and Guddan are the Batman and Joker of Indian TV. Here’s the latest episode of Guddan Tumse Na Ho Payega,

Antara says she doesn’t want money as much as she wants to destroy Guddan. The Joker too wants to destroy Batman, and in an iconic scene burns all the money he has. Antara takes Tanwesh away from Guddan by trying to kill him. This was only a plan by Guddan to get Antara arrested. Just like Batman laid a trap for Joker to get arrested.

Both Antara and the Joker escape from the cops. The Joker threatens the police with a knife while Antara uses a gun. They both escape in police cars. While Antara comes back with a plan to take revenge on Guddan, The Joker takes on the whole of Gotham city.

Antara’s plan continues when she comes out of jail. She tells Guddan that she can only save AJ or Angad. Guddan steals a Royal Enfield for the task to save both AJ and Angad in time. In comparison, Batman also rode his batmobile to save Rachel and Harvey but fails in the task unlike Guddan.

Like Batman saved Harvey first instead of Rachel, Guddan also saves Angad first before riding to save AJ as well. However, it seems too early for Guddan to celebrate because Angad is still in trouble despite being saved. While Antara promises to cause trouble from jail. Who do you think will win in Antara and Guddan’s Batman-Joker fight?

Will Guddan manage to save Angad’s life again? Watch upcoming episodes of Guddan Tumse Na Ho Payega to find out.

Till then if anyone asks you if you would rather be Guddan or Batman always choose Guddan.

Engineers Day: 9 Engineers Who Followed Their Passion And Made It Big In Bollywood