Angad murders AJ and Durga helps him hide the body. Will they get away with the crime? 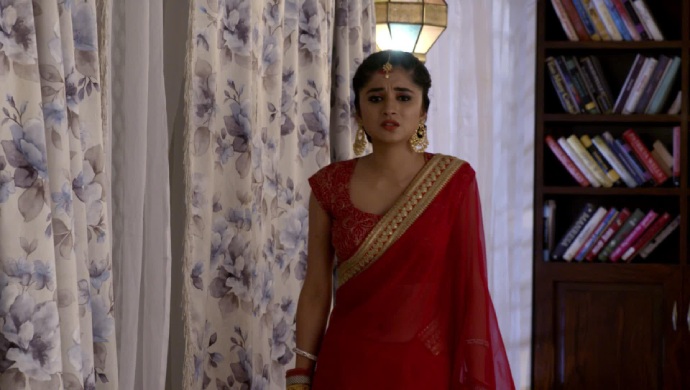 In last week’s episode of Guddan Tumse Na Ho Payega, Durga pushes Angad to marry Guddan. She tells Angad that he is the right man for Guddan, and not AJ. AJ scolds Angad for trying to marry Guddan while she is asleep. Angad is then convinced that until AJ is alive, he can’t marry Guddan. So he dressed up in Guddan’s sari and stabs AJ with a knife. Thus murdering his own brother.

In tonight’s episode, Guddan sees a sign that something is wrong when the sindoor she is carrying for AJ to put on her falls from her hand. Durga sees Angad standing over AJ’s dead body and she is stunned. She panic and begins thinking how to cover up the murder. She first asks Angad to go away till she takes care of things.

Later while she is mopping up AJ’s blood after hiding the body behind the sofa, Guddan shows up asking her what she’s doing. Seeing that Guddan has not yet discovered AJ’s body in the house, Durga tells her AJ had to go back to the restaurant for some urgent work. She sends Guddan to give dinner to Daadi and wait for AJ to return.

Then she takes Saraswati with her to AJ’s cabin in the restaurant. There she shows Saraswati, AJ’s body and asks her help in disposing it off. Saraswati is afraid to do so. Durga threatens to kill her as well if she doesn’t help. Durga sees AJ’s death as a chance for her to become the next powerholder in the house.

Together with Saraswati, they spill kerosene of AJ’s body and light it on fire while leaving an exposed wire in the room. Meanwhile, Angad comes out meet Guddan and shows her the mangalsutra in his hands. He tells Guddan that AJ gave him the mangalsutra before leaving. Guddan takes the mangalsutra from him and keeps it back at the temple.

There she decides to wait till AJ returns and puts the mangalsutra on her himself. The bell rings next morning and Guddan thinks it’s AJ who has returned. However, it is the police. They enter in to tell Guddan and the family that AJ’s body was discovered in the restaurant. They explain that a short circuit caused a fire in the restaurant that left him completely burnt.

Guddan’s first reaction is denial while Daadi and the rest of the family is in shock. Will Angad and Durga get away with the murder of AJ? Stay tuned to find out.

Be Summer Ready With 7 Outfits From Ankita Lokhande's Wardrobe