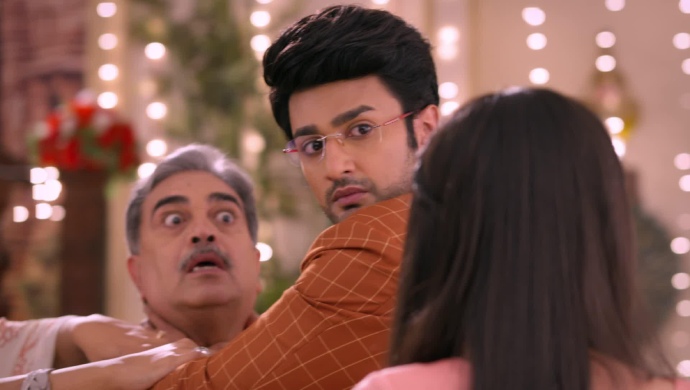 In the previous episode of Guddan Tumse Na Ho Payega, Guddan meets AJ at her parents house. She returns some of the things he left behind at home. She also asks Antara to sign the property papers and take over the property. In return she asks Antara to leave her family and AJ alone. Antara agrees to sign the papers only if Guddan also leaves the house by marrying a much older man. Lakshmi asks Guddan to complain about Antara to the police, but Guddan is worried about her family and refuses to do so.

In tonight’s episode, Guddan once again goes back to her house. She throws her wedding card on the table. She tells AJ that she is getting married to a man named Harish. AJ is upset and tells Guddan to stop this marriage. Guddan tells AJ that she has decided to move on just like he did with Antara. Guddan says no one can change her decision.

AJ burns Guddan’s invitation card. Antara sees this and tries to find out what he is doing. AJ tells Antara that he won’t let the wedding happen. He says that he now realises how Guddan felt when he decided to marry Antara. He plans to go to the Jindal house and stop the wedding.

Harish, Guddan’s soon to be husband, tries to stop AJ from making a scene. Seeing the old man AJ gets angry and chokes Harish. Guddan stops AJ and asks him to leave the house. Antara warns Guddan to not do anything to stop the wedding. Guddan boasts about how AJ still loves her even though he is marrying Antara.

AJ is about to get in the car planning to stop the wedding. Antara walks up behind him and hits him in the head with a rod. She puts his unconscious body inside the car. Meanwhile, Guddan is preparing for the wedding but keeps thinking of AJ. Will she be able to go ahead with the wedding? Stay tuned to find out.