In tonight's episode, with Antara's help and blessings Guddan and AJ happily get engaged in front of the family. 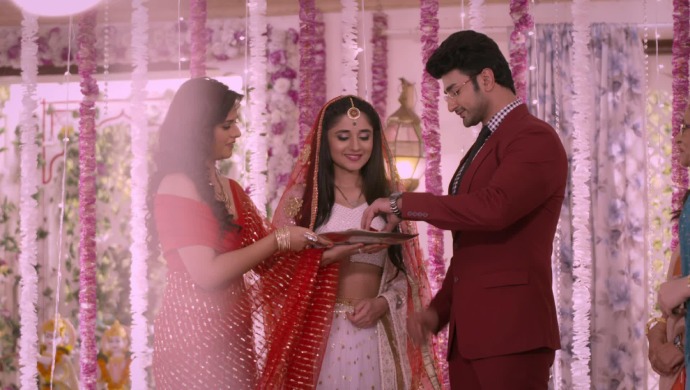 In the previous episode of Guddan Tumse Na Ho Payega, Antara agrees to Guddan and AJ’s marriage. Hearing this, Saraswati complains to her brother Parv in jail. Parv breaks out of jail to stop Guddan and AJ’s marriage. Parv orders Guddan to shoot AJ or he will kill her father. Guddan tries to avoid seeing AJ so she doesn’t have to shot him. When AJ asks Guddan why she is avoiding her, Guddan says she wants to cancel their engagement.

Seeing that Guddan doesn’t shoot AJ, Parv threatens to kill her father. Guddan shoots AJ in front of his family. Parv fulfills his promise to Guddan and releases her father. Once Guddan’s father is released, AJ gets up and begins beating up Parv.

In tonight’s episode, AJ is about to beat up Parv. Guddan asks him to step aside and beats up Parv herself. She tells parv how she used fake bullets and tomato sauce to stage AJ’s death. Guddan continues to beat up Parv till the point where Parv is happy to be arrested. Guddan slaps Parv before getting arrested.

Later, Antara helps Guddan get ready for her engagement with AJ. Antara promises to be like Guddan’s elder sister and make sure Guddan and AJ are always happy. AJ promises Daadi that he will do everything to save his relationship with Guddan.

AJ is also called to the terrace for a surprise. There he sees someone dressed like Guddan. He feels dizzy and hugs Guddan before falling on the bed with Guddan in his arms. When he wakes up he is undressed under the sheets and is shocked to find Antara in bed with him. Will this ruing AJ’s relationship with Guddan? Stay tuned to find out.