Durga plans with Saraswati to ruin Guddan's performance and win the dance competition. 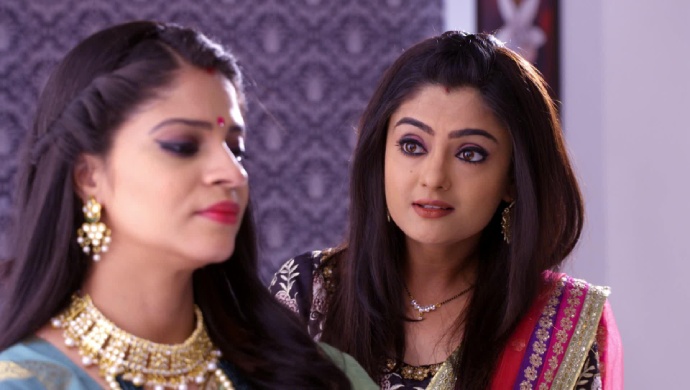 In the previous episode of Guddan Tumse Na ho Payega, Guddan manages to make aamras for 500 kids by using a washing machine to mix the ingredients. AJ’s reputation is saved and Guddan proves that Shanti Bua’s method was wrong. Not ready to accept defeat, Shanti Bua throws another challenge to Guddan. This time she challenges her to a dance-off. Guddan is supposed to train Lakshmi bahu against Durga. However, Lakshmi bahu gets injured in her foot and Guddan has to take his place.

In tonight’s episode, Shanti Bua is pleased with the preparation for the dance competition. She asks AJ to be a judge of the performances. AJ tells Shanti that he trusts her decisions and knows that she will take the right decision for the family. Guddan is not happy to see AJ giving Shanti Bua the power.

Shanti Bua however wants the judging to be fair so she asks Daadi to join her as a judge. She tells Durga and Guddan that they will both dance to two songs. However, neither of them will know which song they will be dancing too. Guddan is worried because she is already less qualified than Durga in dance, now she won’t get time to prepare a song before dancing either.

She goes to complain to AJ for not wanting to be the judge of the dance competition. He tells Guddan that Shanti Bua has never seen anyone be friendly with their bahus all her life. She needs Guddan to personally show her how that old belief is wrong. He aks Guddan to prove Shanti Bua wrong when she herself is judging.

Durga meanwhile teams up with Saraswati bahu and plans to ruin Guddan’s performance.She tells Saraswati which songs she prepared for and asks Saraswati to give Guddan one’s she is not ready for. Saraswati decides to follows Durga’s plan and takes over the music for the dance competition.

When Durga is done with her performance, Shanti Bua is not pleased. She cuts Durga’s marks for making faces and looking right at her saas while dancing. Guddan gets nervous about dancing but then imagines AJ is dancing with her and enjoys her performance? Will Guddan win this challenge against Shanti Bua? Stay tuned to find out.

Guddan Tumse Na Ho Payega 2 May 2019 Preview: It's a Tie Between Guddan And Durga