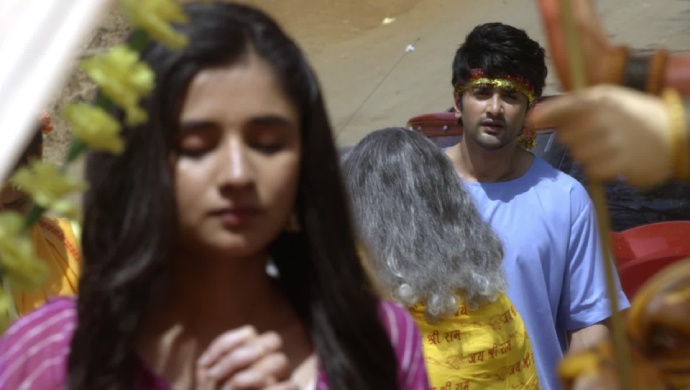 In the previous episode of Guddan Tumse Na Ho Payega, Guddan convinces Angad to go to the hospital. She takes him to the same mental hospital where she expects to find AJ. Once she finds AJ in a hospital room, she realizes AJ is being tortured by Rocky. While she is watching, Angad joins Rocky in torturing AJ. She vows to take AJ away from the hospital and get revenge on everyone involved.

In tonight’s episode, Guddan enters AJ’s room after knocking a guard unconscious. She then takes AJ out on a stretcher dressing like a doctor. Durga and Angad are with Rocky, who is injured after getting in a fight with AJ. Guddan is noticed by a male nurse who sees her taking AJ away. He rings the alarm before Lakshmi knocks him unconscious.

Hearing the alarm Angad, Durga and Rocky panic. They set out in search of AJ and Guddan trying to bring them back. Guddan meanwhile, takes AJ in the car and drives him away. On the way she stops when she sees a Durga temple. She goes out to to pray.

AJ becomes conscious when Guddan is out of the car and he gets out too. He notices Guddan in the temple and goes toward her. Before he can reach Guddan, he is stopped and taken away by some goons. Guddan  returns to the car and finds AJ missing.

She goes home, hoping to find him there. When she enters AJ’s room, she finds Angad there. Guddan refuses to be with Angad anymore. She even tells him that she won’t marry him, since AJ is not in danger anymore. Angad tells her that his goons kidnapped AJ when Guddan was at the temple? He then forces Guddan to do the Durga Puja for the final day with him.

Lakshmi shows up with the cops to get Angad arrested. However, Guddan stops the police by not making any complaint.She tells Lakshmi that she is back under Angad’s control to save AJ. While doing the Durga Puja, Angad promises to marry Guddan the next day itself. Will Angad be able to complete his promise? Stay tuned to find out.