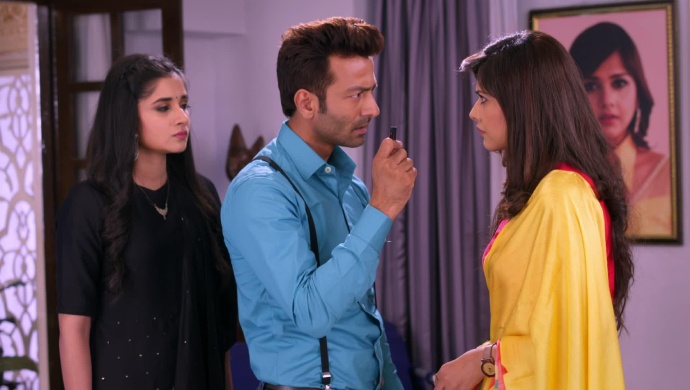 In tonight’s episode of Guddan Tumse Na Ho Payega, Guddan tries to show the whole family Antara killed Durga. But instead she finds Durga feeling fine and healthy. Durga tells Guddan when they are alone that she will always be again Guddan. Antara promises to cause so many misunderstandings between AJ and Guddan that their relationship fails. AJ tells Guddan he still trusts her but he also faith in Antara.

In tonight’s episode, Guddan is doing a puja in the house when AJ and Antara walk in with the rest of the family. During the puja the door opens and finds out that Antara’s brother has returned. Antara hugs her brother Vikram and welcomes him.

Vikram apologises to the Jindal’s for accusing the family after Antara’s death. AJ forgives Vikram and let’s him speak to Antara privately. When Antara is with her brother Vikram, she tries to tie a rakhi on his wrist. Vikram throws the rakhi away. He also slaps Antara and says she is no longer his sister.

Guddan enters the room and Vikram tells Antara that Guddan told him everything. Antara tries to blame Guddan for spreading false rumours. Vikram tells Antara to stop lying to him since he is from the CBI. He shows her a pen drive where there’s proof showing that Antara was never in a hospital for 2 years and a recording of her doctor’s confession.

Vikram gives the proof to Guddan and asks her to deal with Antara however she wishes to. Guddan gives Antara half an hour to confess her crimes to the whole family or she threatens to expose Antara’s whole truth. Durga panics and wonder why she picked Antara’s side since they are now losing.

Antara confesses that nothing may have happened between her and AJ. She says like AJ she too had passed out because of her medicines. Even though it is not the whole truth AJ and Daadi are upset with Antara. Guddan also doesn’t reveal Antara’s whole plan yet. Will Antara mange to win back AJ’s trust? Stay tuned to find out.