In tonight's episode, Antara admits that he knows Tanwesh is interested in her but she wants to marry AJ only to get revenge on Guddan. 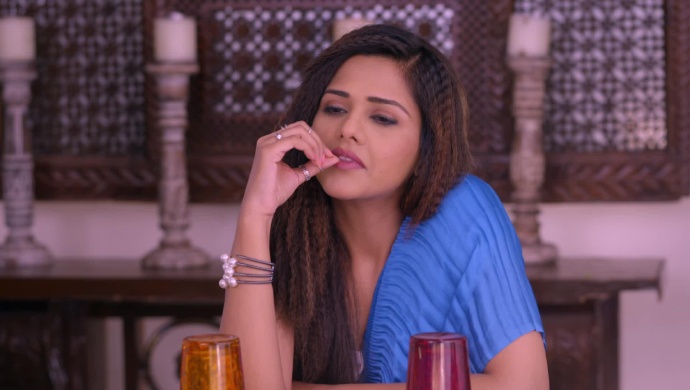 In the previous episode of Guddan Tumse Na Ho Payega, Saraswati reminds Antara to check the camera footage. But AJ shows up as Tanwesh Handa and steals the pen drive containing the hidden camera footage. He then changes back into AJ’s clothes. Guddan walks in and AJ tries to flirt with her. Guddan asks AJ to not use such cheap tricks to win her over. AJ walks in as himself and meets Antara. She notices that his shoes as the same as Tanwesh Handa’s. Antara decides to go to Tawesh’s hotel room to find out the truth, but Guddan hears her.

In tonight’s episode, Guddan rushes to tell AJ that Antara is going to the hotel. However, AJ is in the bathroom and doesn’t hear Guddan. She finds the door open and walks in. AJ walks out of the shower in a bathrobe and is surprised to see Guddan there. He tries to flirt with her but she doesn’t pay attention to him.

Guddan tells AJ that while he is flirting with her, Antara is going to meet Tanwesh Handa. AJ decides to dress up and go to the hotel where Tanwesh Handa is staying. When Antara reaches the hotel, the receptionist makes her wait since Tanwesh has asked to not be disturbed. Antara mananges to get his room number and knock on his door.

Guddan and AJ see Antara reach before them. AJ says he has a plan and goes to meet Antara outside his room with shopping bags. He says that AJ and he both have the same shoes. He tells Antara that he also brought matching shirts and suits for AJ. Antara believes him and as a parting gift AJ gives Antara a car.

Guddan is worried that AJ’s plan failed. AJ shows up and informs her that he succeeded, Back at home Saraswati makes Lakshmi jealous talking about how much fun she had riding in the new car. Antara says she knows Tanwesh likes her and she plans to take all his money, but she wants to only marry AJ because of Guddan.

Lakshmi tells Guddan that Antara will only marry AJ to get complete revenge on Guddan. AJ tells Guddan to not lose hope. He comes up with a plan which everyone likes apart from Guddan. What plan does AJ have in mind for Antara? Stay tuned to find out.