It is finally revealed who AJ's mystery woman is. Trust us, it will blow your mind! 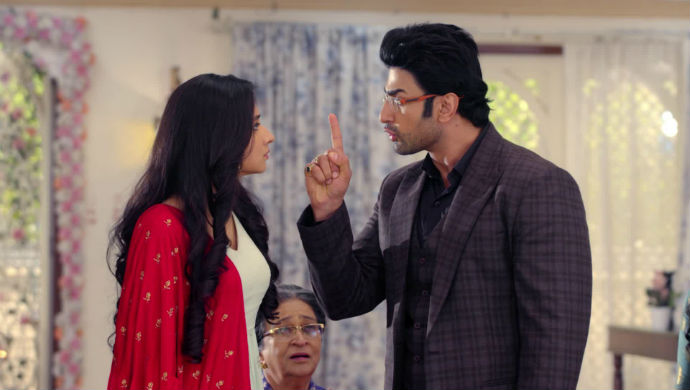 In the last episode of Guddan Tumse Na Ho Payega, we saw AJ panicking when he hears a woman singing and dancing inside the Jindal mansion. He suspects it his mystery woman, and comes rushing to stop her. The woman reveals herself and it turns out to be Guddan. She pretends to be AJ’s mystery woman to trap him. She asks AJ to reveal the truth but he storms out without giving an answer.

Meanwhile, Revati gets a video from Parv, which shows him getting tortured by his wife Siddhi. He texts Revati saying he is mistreated by his wife and hence goes out looking for love. He asks her for forgiveness. Revati’s mother manipulates her into calling Parv and she does, but Saraswati asks him not to attend it. She further adds that they need to pitch Guddan against Revati, at the right time.

AJ brings a woman, saying he’s involved with her. But Guddan calls out his bluff and is adamant that this is isn’t the mystery woman that AJ has been hiding. The episode ends with Guddan determined to find the truth.

In tonight’s episode, we saw Parv taunting AJ about his supposed extra-marital affair. AJ goes to his room and takes out a bundle of cash from his cupboard and Guddan sees his act. She decides to investigate. AJ hands over the cash to the woman he had brought home and thanks her for the act. He tells the woman to keep medicines ready for his mystery woman and their conversation is overheard by Guddan.

The lady who helped AJ goes back to the secluded house and Guddan follows her there. She sees her walking upstairs with the cash and medicines. Guddan follows her footsteps and sees the woman giving an injection to lady’s mystery woman. She opens the door and barges in.

The next morning, Guddan returns to the Jindal mansion with AJ’s mystery woman! She calls out to AJ and asks him to reveal the truth. AJ gets furious and finally reveals that the woman in the veil is his younger brother Angad!

Angad feels giddy but AJ holds him in time. Angad wonders why he is in a woman’s get up and says that the medication must have worn off. AJ takes Angad upstairs and puts him to sleep. Dadi breaks down after seeing Angad and reveals to Guddan and the rest that he is mentally unstable and that he fell in love with a girl, 12 years ago. She further adds that he wished to marry her but the girl broke his heart. Since then, his mental condition deteriorated and soon, he started dressing up and dancing like a woman. Dadi shocks everyone by saying that Antara died as a result of Angad’s condition.

AJ intervenes and says that Antara’s death was an accident and Angad had nothing to do with it. He says he wasn’t able to prove the same in court and as a result, the court held Angad accountable. AJ adds that he couldn’t have let Angad rot in jail and hence kept him as a secret all these years. He gets furious for Guddan for interfering and forcing him to reveal Angad’s truth.

Dadi asks AJ if they can keep Angad at home but he says they can’t as he can prove to be dangerous to the others. The episode ends with Guddan deciding to bring harmony to the Jindal family by bringing Angad back in the picture.

Will she succeed in doing so? And will AJ let Angad stay at the Jindal house?

Watch Arjun Kapoor- Parineeti Chopra's Namaste England, If You're In The Mood For A Romance Drama With A Happily Ever After!