Shanti Bua and Durga get into an argument with Guddan when AJ goes out for sometime during the date. 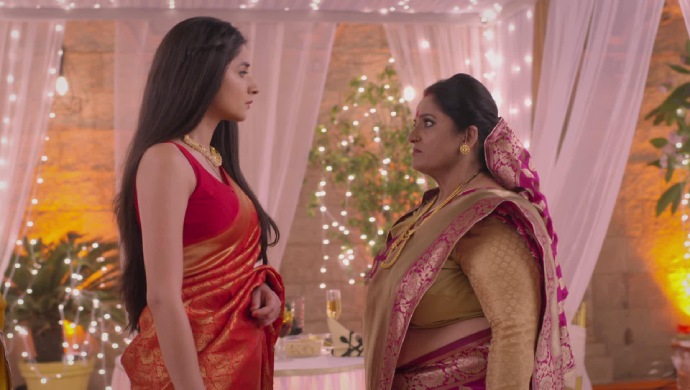 In the previous episode of Guddan Tumse Na Ho Payega, AJ and Guddan are preparing for their dates. Lakshmi goes to help Guddan while AJ asks for Daadi’s help in getting ready. Lakshmi and Daadi convince AJ and Guddan to get gifts for each other. Guddan gets AJ a book while AJ gives her a selfie stick. They are both disappointed with their gifts and realize the age gap between them means they can’t connect with each other.

In tonight’s episode, Guddan and AJ continue with their date. Guddan asks if she can put on some music. When she plays music, AJ asks if she would like to dance with him. While they are dancing, the music stops. Guddan goes to fix it back. AJ finds out that the fuse is spoilt for the stereo, he goes to look for an extension to plug in the stereo and play music.

Back in the house, Durga is in the kitchen, angry that her husband is listening to Guddan’s advice. Shanti Bua enters and further instigates Durga. She says that slowly Guddan will take over control of the house from Durga. Saraswati also shows up and informs Durga that Guddan is out on a date with AJ planned by Lakshmi and Daadi.

Guddan is waiting for AJ to show up. However, Durga shows up along with the rest of the family. Durga tells Guddan that she doesn’t consider her as a mother-in-law. She also tells Guddan that she has no right to interfere in her life. Durga is also about to slap Guddan. Guddan stops her and is shocked by this behaviour.

Guddan tells Shanti Bua that her strict methods are making Durga angry which is making her horrible to all the family members. Shanti Bua tells Guddan that if she had been strict earlier Durga wouldn’t even think of slapping her. Daadi asks Durga to apologise to Guddan for her actions.

Later, Guddan locks herself in a room but gets scared when she finds a cockroach there. AJ calls her out and takes her back to their date but Guddan refuses to speak to him. AJ manages to calm Guddan’s anger down and lifts her mood again. Stay tuned to find out how the rest of Guddan’s date with AJ goes.