Rocky catches AJ and Guddan talking about their fake divorce and threatens to expose them. 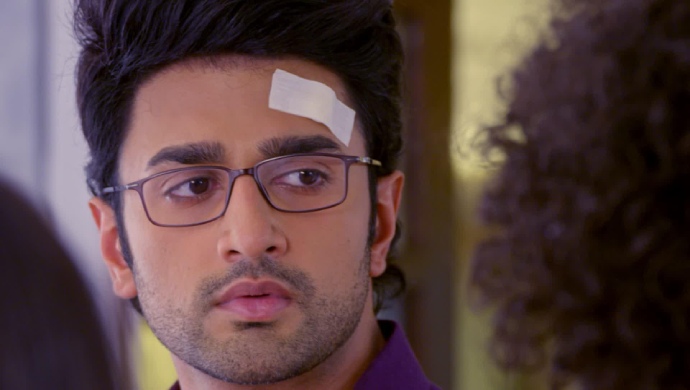 In the previous episode of Guddan Tumse Na Ho Payega, AJ finds Guddan trying to attack Angad in his sleep. AJ stops her and tells her than he not only remembers her but also loves her. He tells her that he is faking his memory loss to find the person instigating Angad. Later AJ asks Guddan to sign on divorce papers. Guddan tears the papers and refuses to sign the papers.

In tonight’s episode, AJ and Guddan are shocked along with the rest of the family when Rocky shows up. AJ tries to control his anger and welcomes Rocky home. Guddan however, tells everyone that atleast they remember what Rocky did to her in Goa. They should tell AJ to kick Rocky out. However, AJ steps in and stops Guddan from taking Rocky out of the house.

He not only invites Rocky to have lunch with them but also asks everyone to ignore Guddan who refuses to eat with Rocky. Later on AJ consoles Guddan when they are along together. He tells her to trust him. He wants to hurt Rocky as much as she does. Meanwhile, Guddan doubts Durga because Rocky is her brother and he keeps showing up to ruin AJ and Guddan’s life.

Durga tells Rocky that AJ looks like he has really lost his memory. However, she is not yet convinced. She tells Rocky that once AJ divorces Guddan she will be convinced that AJ is not lying about his memory loss. Later that day, Angad shows up with the divorce papers and hands them to AJ.

AJ signs on the papers and asks Guddan to sign too, thus completing their divorce. Guddan is surprised but does it anyway. She later goes up to her room to pack her bags and leave the Jindal Bhavan. AJ once again comes up and stops her.

He shows Guddan the divorce papers where the signs have disappeared. He tells Guddan that they had signed with ink that disappears after five minutes. Guddan hugs AJ out of relief. AJ notices Rocky looking at this through the glass door. He opens the door and takes the divorce papers from AJ. He runs out threatening to expose AJ and Guddan’s plan.

However, his plan doesn’t work when he shows Angad the papers and they have AJ’s and Guddan’s sign on it. AJ shows Guddan that he had replaced the divorce papers to give Rocky the ones that had a sign. With their plan still on track, will it lead AJ and Guddan to Durga? Stay tuned to find out.

Aapke Aa Jane Se To Take A Leap: Sahil-Vedika Will Die And Reunite In Next Birth