Akshat manages to save Guddan from the fire. But is she going to be alright? 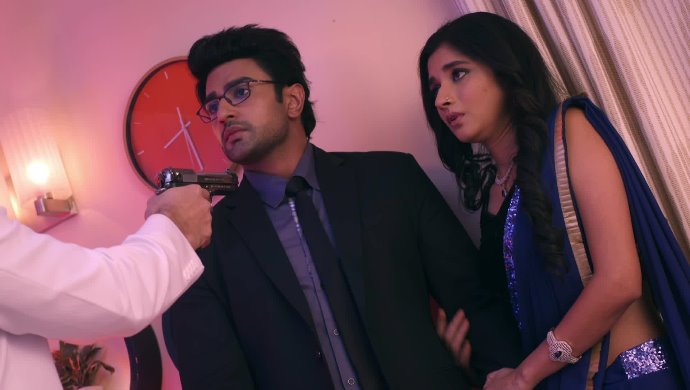 In the last episode of Guddan Tumse Na Ho Payega, we saw Guddan and Akshat getting close and celebrating Valentine’s Day. The couple was joined by Yeh Teri Galiyan‘s Pucki- Avinash and Aapke Aa Jane Se’s Vedika-Sahil and the love birds celebrated their love with this special day, until they were disrupted by a goon named Vijay. He is against love and is determined to ruin Akshat- Guddan and others’ celebrations. He even wishes to kill them off and starts by targeting Guddan and AJ. Just when he is about to shoot Akshat, Guddan comes in between and saves him.

Guddan has a talk with Vijay and tries to instill some sense in him. But Vijay is adamant that he is against love and even confesses into having killed his own wife Riya, after discovering that she was cheating on him.

Guddan questions whether he tried to find out why Riya betrayed him in the first place. Akshat tells Vijay that trust is the foundation of a healthy relationship and instead of committing a heinous crime as he did, Vijay should have confronted his wife. He feels guilty and says he will put down his confession in writing. Akshat tells him that won’t work and that he would have to turn himself in. Akshat calls the police and he and Guddan ask everyone to vacate the place.

In tonight’s episode, we saw Akshat and Guddan trapped in a fire! Guddan hands over Akshat his specks and confesses that while they don’t have conventional love like other couples, she dotes on him as she trusts him. Their conversation is being heard by Vijay, who has trapped them inside, as despite coming to a realization that he was wrong, there’s a part of him that still seeks revenge. Guddan starts feeling suffocated and faints. Akshat desperately tries to get her out, but in vain. He too collapses as he can’t breathe. Vijay realizes that he has crossed the line and opens the door to let air in.

He rushes to Akshat and says that he was wrong to doubt their relationship and love for one another. Vijay says that he has realized that Akshat loves Jindal and can even give his life for her. Meanwhile, Revati breaks off relations with Parv as she realizes his love for her was fake all along since he didn’t try and save her from the fire. Instead, she realizes that Guddan was right and even risked her own life to save her. The episode ends with Akshat rushing Guddan out.

Will Guddan be alright? Will she recover from this tragedy? Stay tuned for all the updates!

Why Badlapur Is An Important Lesson In Forgiveness