In tonight's episode, Guddan accuses Antara of killing her own brother Rawat, but AJ defends Antara and scolds Guddan. 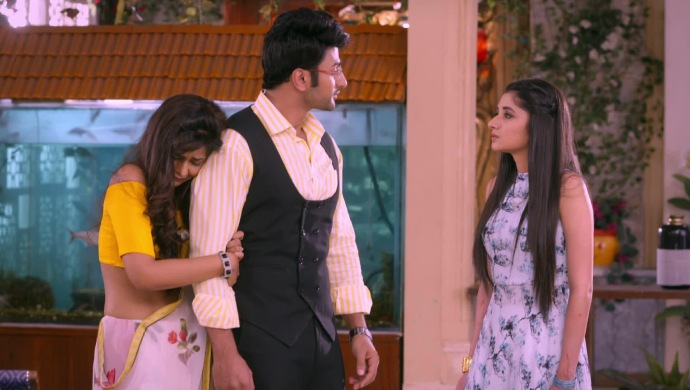 In the previous episode of Guddan Tumse Na Ho Payega, Guddan promises to find proof against her through Rawat. AJ tells Guddan that everytime they come close something bad happens around them. Antara tries to make her brother, Rawat, join her side and leave Guddan alone. When he refuses to do so Antara injects poison in him and kills him. Guddan finds Rawat dying, but before dying he admits that Antara killed him.

In tonight’s episode, Guddan returns to the Jindal Bhavan where they find blood on her hands. The police enter in with Rawat’s dead body. They tell AJ that Guddan had told the police she will tell them about Rawat’s killer in the Jindal Bhavan. Guddan speaks up and accuses to Antara of killing her brother.

Antara is crying over her brother’s dead body and Durga points that out to Guddan. Antara also gets up and says that Guddan is making a mockery of her brother’s death. Guddan tries to take Antara away from Rawat’s body, but AJ stops her. He tells Guddan that he has had enough of her stories. He tells the police that Antara is innocent.

AJ refuses to believe Guddan’s story and says she is doing this out of jealousy. Later, at the funeral the police shows up and says that Rawat was assassinated by a gang who didn’t want to be arrested. AJ tells Guddan that this proves Antara didn’t murder her brother. He asks Guddan to apologise to Antara.

Guddan refuses to do so, instead her holds her hand over the flame. She threatens to keep her hand there till AJ believes her. AJ takes Guddan’s hand away and tells her that he still loves her but can’t believe every made-up story she has. Guddan is happy knowing at AJ still loves her atleast.

Guddan calls an electrician to remove the electricity from a plug point. Then she takes two wires and attaches them to the socket. She plans to use the wires to threaten Antara. What new plan does Guddan have in store for Antara? Stay tuned to find out.