After a long wait, AJ finally ties a Mangalsutra to Guddan! Read for more details. 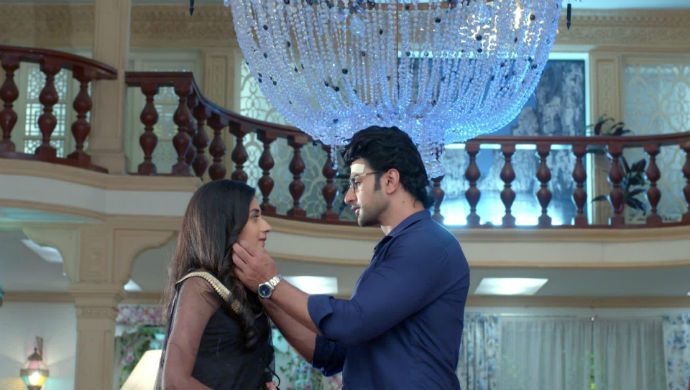 In the last episode of Guddan Tumse Na Ho Payega, we saw Angad trying to get close with Guddan. He buys her an expensive necklace, but she refuses to take it. Later, Angad meets Durga who tells him about how Guddan is only pretending to love him and that AJ hasn’t lost his memory. But Angad doesn’t believe her. To prove that she’s right, Durga mixes a sedative in Guddan’s drink. The latter consumes the drink and spills the truth, without knowing that something is mixed in the drink. A troubled Angad is shattered and begins drinking himself.

Rocky tries to stop him and reminds him of Guddan’s fake act. Angad gets violent and attacks Rocky. But the latter knocks him unconscious and kidnaps him. He informs Durga about the same and she panics. She rushes to AJ and the episode ends with him telling her that he remembers everything that happened in Goa.

In tonight’s episode, we saw Durga breaking down and saying that realizes her mistake into making Rocky a part of the family. Guddan assures her that they will find Angad and says that she has an app that can trace Rocky’s location. She uses the app and is able to see where he is. Guddan,and AJ make way to reach the spot while Durga stays behind. Saraswati compliments her on her fake act and says that she didn’t know Durga could be so conniving and go against her own brother to save her image.

Later, just when Guddan and AJ are about to leave the house, he locks her inside the room. He says she shouldn’t be accompanying him considering how dangerous Rocky is. He asks Durga and the rest to not let her out, no matter how much she begs. AJ leaves and rushes to the spot where Rocky is. He is about to stop him when he notices a gun in his hand pointing towards Angad.

He asks Akshat to play a game with Angad, which involves them shooting at each other. Meanwhile, Guddan pleads Durga and the rest to let her out and they are in a dilemma as to what they should do. Angad asks Akshat to shoot him, to save himself but the latter refuses. Rocky loses his patience, and just when he is about to shoot Angad, Guddan reaches the spot with her phone camera recording the act!

Rocky asks his men to catch hold of Guddan but they faint. She reveals that she fed the goons some laddoos that had a sedative mixed in them. She threatens Rocky to put his gun down or else she will leak the video online. She announces loudly that she is switching off the record button and Guddan’s stupid move makes Rocky pick up his gun again. He is about to shoot when he realizes that there are no bullets in his gun.

Just then, AJ attacks Rocky and the police come in and capture him. Guddan and AJ rescue Angad and get him home. Later, Dadi slaps Angad and says that he should be ashamed for trying to create a wedge between AJ and Guddan. Angad says he realizes his mistake and begs for mercy. AJ intervenes and says that the one person they all should be apologizing to is Guddan, since she has suffered a lot in the Jindal house.

AJ keeps his promise and places the mangalsutra on Guddan’s neck. But Durga and Saraswati are visibly jealous.

Do you think they will try and create a wedge between Guddan and AJ? Stay tuned for all the updates!

Bhumi Pednekar On Sonchiriya Prep: Isolated Myself From The World For 45 Days