Guddan trumps Rawat by helping AJ during the puja ceremony. What does she do? Find out! 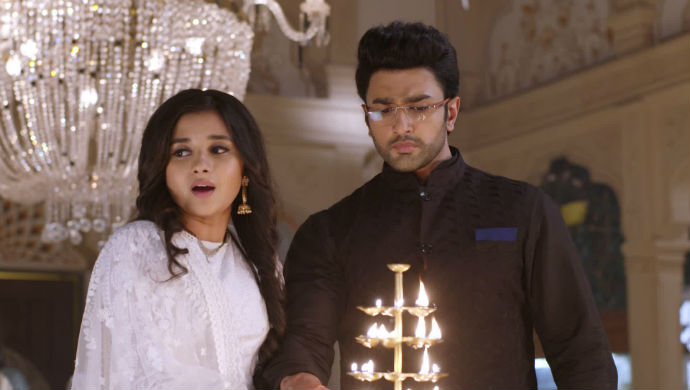 In the last episode of Guddan Tumse Na Ho Payega, we saw Rawat telling Guddan that he will seek revenge from AJ for Anatara’s death. He maintained that he won’t let AJ conduct the prayer for Antara’s death anniversary. Guddan says that she won’t let him ruin this day for AJ. Later, Guddan gets busy with the preparations for the puja. She enters the kitchen to help out Durga and rest of the Jindal bahus. But Durga insults Guddan by saying that she can never take Antara’s place. Instead of reacting, Guddan replies in a calm manner saying that she considers the Jindal family as her own, even if other’s don’t accept her. Guddan’s kindness impresses Dadi.

Rawat scares Guddan by suggesting that he has mixed poison in the tap water. Hence, if AJ washes his hands, they will get ruined and he won’t be able to conduct the puja. Guddan panics and rushes to stop AJ, knocking over a bowl of food in the process. Rawat enters the kitchen and acts innocent, saying that Guddan is paranoid to have thought that there was poison in the water. Guddan realizes that Rawat had tricked her by lying. AJ gets furious with Guddan’s behaviour and the episode ends with him asking her to leave.

In tonight’s episode, we saw Dadi reprimanding AJ for yelling at Guddan and asking her to leave. He says he never meant to hurt her and reveals that he only asked her to go away, so that Durga and the rest of the housemates don’t disrespect her. AJ admits that he respects Guddan and acted this way, keeping her safety in mind. Meanwhile, Rawat tries to instigate Guddan against AJ by saying that the man has no respect for her. Guddan asks Rawat to not interfere in their business.

He tells her that an investigation has started on Akshat for supposedly murdering Antara and soon the truth will be out. Later, Guddan joins the prayer meet and AJ is asked to commence it. He goes to pick up the lamp to light it and Guddan realizes that Rawat has kept a diya underneath it, to make the handle hot. Guddan rushes to catch hold of the lamp, before AJ can. They both do the puja together and AJ goes to take the lamp from her when he realizes the handle is hot.

AJ asks Guddan to let go off the handle and realizes that her hand is burnt. He asks her as to why she didn’t tell him that her hand was burning. Guddan says it doesn’t matter and the handle could have burnt AJ’s hand hence she held it. AJ applies cream on her hand to soothe the burn.

Later, Guddan takes prasad to Rawat’s room and he is furious at her for ruining his plan. She asks him to put his anger aside and think about how important the day is for Antara. She asks him to have kheer as it would make her happy. Rawat agrees, but not before taking an extreme step of mixing an entire bottle of chilli powder in the kheer and gulping it down.

Guddan realizes that the picture of her mother is missing and is placed next to Antara’s. AJ says he has done to show respect. Durga on the other hand complains about Guddan’s behavior to Dadi, but the latter defends her saying that she made up for the behaviour with her caring gesture for AJ.

Rawat gets a call informing him that the cassette with AJ’s voice recording on it, is back from the forensic department and he can collect it. The episode ends with Rawat telling Guddan about the development.

What will Guddan do next? Will she tell AJ about Rawat’s plan? Keep watching this space for more updates!

Catch all the episodes of Guddan Tumse Na Ho Payega exclusively on ZEE5.

Have You Seen Richa Chaddha's Cabaret Yet? If Not, Then Click Here To Watch This ZEE5 Original Now!

7 Things Siraj of Baarish Aur Chowmein Learnt When He Moved To Mumbai!