In tonight's episode, AJ and Guddan clear their misunderstandings but, AJ's ex-wife Antara returns to the Jindal Bhavan. 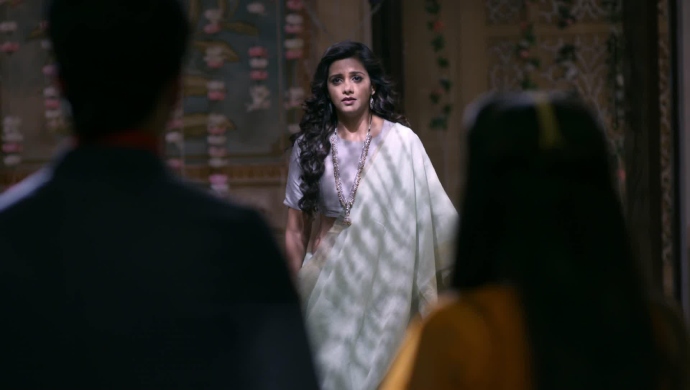 In the previous episode of Guddan Tumse Na Ho Payega, Guddan reads AJ’s love letter. She decides to wear the sari that AJ brought her and express her love. At the engagement ceremony, AJ waits to know Guddan’s reply, but Guddan shows up in a sari of a different colour. AJ walks away from the engagement and refuses to force Guddan into marriage. Durga and Saraswati save happy that their plan of exchanging the saris worked in ruining the marriage.

In tonight’s episode, Guddan fights with AJ near the swimming pool. She doesn’t understand whe he said he loves her and called off the wedding. AJ tells Guddan that it was a mistake to write her a love letter. Hearing this, Guddan refuses to let AJ come near her. A flower pot falls and hits the ground a stone flies and cuts Guddan’s cheek.

AJ sprinkles water on Guddan’s face to stop the bleeding. Guddan refuses his help and asks him to stay away from her. While Guddan is scolding AJ, he notices the colour blue fading from the sari and revealing a red-coloured sari. AJ throws Guddan in the pool to see if the colour fades away.

Durga makes Daadi admit on the mic that AJ decided to not marry Guddan. AJ realises that Guddan wore the same red sari he gifted her and asks her to say that she loves him too. Lakshmi interrupts them and says all the guests are leaving because the wedding is cancelled. AJ and Guddan return to complete the marriage in new clothes.

Durga and Saraswati are hoping for a miracle to stop the wedding. AJ is about to put a ring on Guddan’s fingers and re-marry her. Just then there is a sudden knock on the door. The rings slip from Guddan and AJ’s hands. Lakshmi wonders who could have come so late to the wedding.

The lights start flickering and winds start blowing. The door bursts open and Antara walks in. AJ is shocked to see Antara’s face before his eyes while Antara sees AJ’s new ring which fell from his hand. How will Antara’s arrival affect AJ and Guddan’s relationship? Stay tuned to find out.