Guddan shames Rocky for behaving badly, in front of his entire staff. How will Rocky react to this insult? 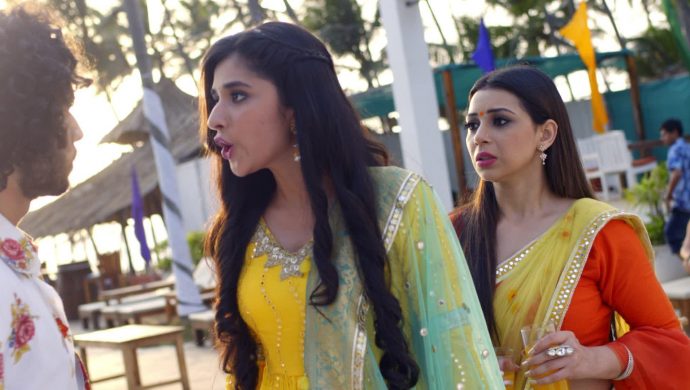 In last night’s episode of Guddan Tumse Na Ho Payega, we see Guddan find out about Rocky behaving badly with Lakshmi every Holi when they go to Goa. Lakshmi asks Guddan to not say anything to Rocky because she doesn’t want to ruin family relations. Meanwhile, Revathi rejects Parv even after he fakes a suicide attempt to be with her.

Today, Guddan is having breakfast by the poolside with Angad when Lakshmi is walking by her table. Rocky walks up behind her and pulls her towards him by her waist causing the juice in Lakshmi’s hand to spill and grabbing the attention of Guddan. Rocky begins harassing Lakshmi again publicly while Saraswati and Durga laugh it off as fun.

Guddan steps in, protects Lakshmi and scolds Rocky,telling him to respect boundaries. Rocky ignores her and tries to go ahead anyway when Guddan pushes him aside and he falls into the pool with people around laughing at him.

Parv calls up his sister Saraswati to complain about Revathi and how she refuses to fall in love with him despite faking his own suicide. Saraswati who is plotting the downfall of both sisters Guddan and Revathi tells her brother Parv that this is just her way of showing love and he shouldn’t stop badgering Revathi because she doesn’t show interest in him.

Then she goes to Rocky and instigates him towards Guddan blaming her for the change in Lakshmi. When Lakshmi, a vegetarian, bravely refuses to eat fish fed to her by Rocky and sternly turns him away, Rocky is convinced that Guddan is causing this change and he sets out for revenge on Guddan.

AJ plans on taking Angad out for sightseeing around Goa. He then sees Guddan also tagging along with Angad, he is surprised but carries on. Guddan and Angad are enjoying the outing, however AJ sees it as Guddan trying to spend more time with him using Angad as an excuse. Guddan is offended because she only came along after Angad insisted. AJ and Guddan decide to go their separate ways for a while and meet up later.

Guddan is strolling around the sights but what she doesn’t know is that Rocky is following her now. Will this detour end well for Guddan? Will AJ end up regretting his decision of leaving Guddan alone? Stay tuned for further updates.

Catch up on your favorite episodes of Guddan Tumse Na Ho Payega, exclusively on ZEE5.