In tonight's episode, the masked killer attacks Guddan again. Guddan chases her attacker and catches Antara while she is trying to escape. 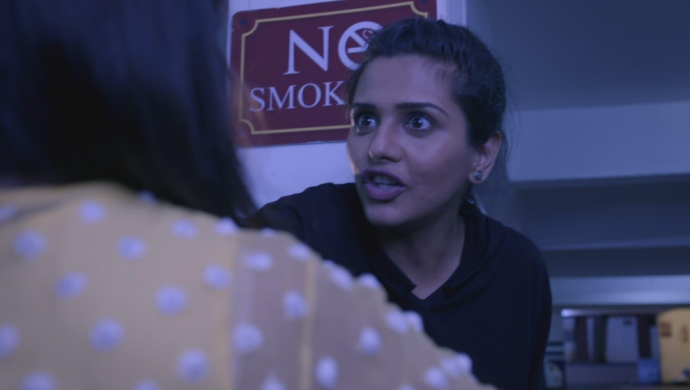 In the previous episode of Guddan Tumse Na Ho Payega, The police ask Guddan if AJ tried to shoot her. Guddan says that AJ loves her and would never try to harm her. Later, AJ tells Guddan she doesn’t need to do an favour by sparing him. Guddan says she is sure AJ doesn’t hate her. That night, Guddan sees AJ going out in his car and follows him. Guddan is shocked when she folows AJ and finds him hugging Antara. She threatens to call the police and arrest Antara. However AJ stops Guddan and warns her to not call the police of he will kill her.

In tonight’s episode, Guddan goes to AJ’s room and finds him cut his hand. Guddan takes care of AJ’s wound but he goes away from her. Guddan decides to end everything and calls the police and tells them about Antara’s location. When Guddan reaches the house with the police they find AJ and Daadi there.

Daadi says AJ bought this house as an investment and was showing her around. AJ asks the police to leave because Antara is not there in the house. Guddan wonders why AJ is still supporting Antara. She admits she was wrong and asks the police to leave. AJ thinks it is better that Guddan stays as far from Antara because her plan is too evil.

Antara and Parv are celebrating at Guddan’s failure. Antara thanks Parv for helping her leave the house before the police showed up. They both have a common goal of ruining Guddan’s life. Later that night, Guddan is asleep in bed and wakes up hearing something downstairs. The masked attackers hides behind the stairs.

When Guddan is walking down the stairs the attacker tries to stab her. Guddan avoids the attack and runs after the attacker. When she reaches the parking lot, Guddan chases a figure dressed in black robes. Guddan catches up and finds it to be Antara. She warns Antara to stay away from the house.

Antara taunts Guddan for losing everything. Later she goes and tells someone else who is the actual person that attacked Guddan. Antara warns the real attacker to be more careful and tells him his time will come to take Guddan’s life. The next morning while doing the house aarti, Guddan notices a earring fallen near the staircase.

She remembers that Antara was wearing both her earrings. She understands that Antara is not the real threat but has no other clue. Will Guddan manage to find out the person who attacked her and is stressing out AJ? Stay tuned to find out. Watch the latest episodes of Guddan Tumse Na Ho Payega, now streaming on ZEE5.

Marriage And Motherhood Can No Longer Write Off An Actress, Thanks To Kareena Kapoor Khan